After settling the $37-million fraud lawsuit with new board member Garland Murphy, Gospel for Asia now wants donors to regift their settlement funds back to Gospel for Asia. According to an appeal letter sent to me by a former donor, GFA is spending promotional money in an attempt to recapture their losses. Take a look: 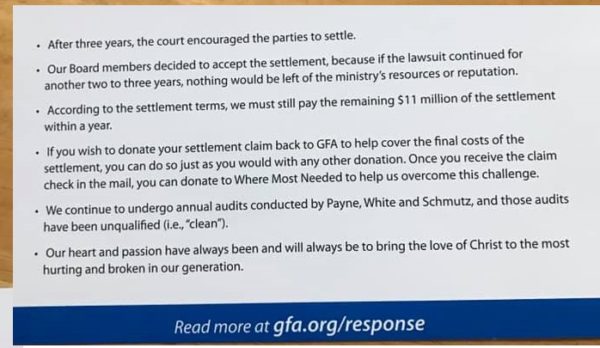 This isn’t the first time GFA has attempted to collect these funds from former donors.

Where are the audits?

In the first image above, GFA boasts about their clean annual audits. Prospective donors should know that GFA refuses to release those audits to the public. One of the initial red flags about GFA came from the last publicly available audit. In that audit, GFA said the nearly $20-million to complete their Wills Point, TX headquarters in 2013 came from an anonymous donor.  However, now we know that those funds actually came from donor funds given to Believers’ Church in India as a related party transaction. GFA acknowledged this to the Evangelical Council for Financial Accountability which was one of the reasons for GFA’s expulsion from that group.

Since that time, GFA has kept their audits in house. Why should we believe them? GFA told the world the 2012-2013 audit was clean and accurate. Trust has to be earned and GFA has not shown any ability to step into the light. They do not answer questions about these audits, their loss of charity registration in India or their practices in Believers’ Church. It long past time for GFA to address these issues for the sake of the mission they claim to uphold.