At the beginning of October, The Times of India reported that the Indian government canceled the charity registration of Believers’ Church. BC is the field partner of Gospel for Asia in the United States. GFA is the second largest missionary organization in the U.S.

According to the report in The Times of India, Believers’ Church acknowledged that the church was not bringing in foreign funds.

Fr Sijo Panthapallil, spokesperson of Believers Church, told ToI over phone from Delhi: We are not bringing foreign funds, as there is a standing re vision order [on the FCRA registrations, normally given for a five-year period and then renewed thereafter.]”

If BC (along with Gospel for Asia –now known as Ayana Charitable Trust — and other related trusts) is bring money into the country, then why hasn’t GFA alerted international donors? There is no assurance that funds now being given for India will get there. And yet, GFA continues to raise money as if those funds are all going to “the field.” The image below is from GFA’s website. 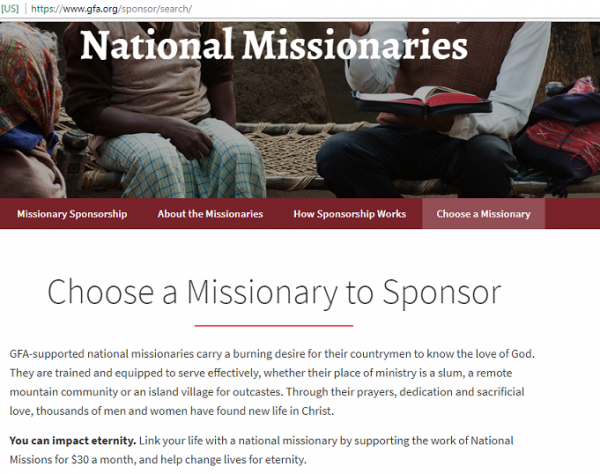 I searched throughout the GFA website but found nothing about the cancellation of GFA’s registration on the field. Perhaps GFA is sending the money to other Asian countries or other obscure affiliated charities. However, donors should know what is happening.

Why Not Tell Donors?

Currently, GFA is being sued by two couples in separate fraud cases in part because the donors believe their funds were not dispersed as they intended. It seems to me that GFA is setting themselves up for more such accusations by not telling donors that the funds for Indian missionaries, Indian children sponsored through Bridge of Hope, and other India-specific donations have been restricted from India.

In contrast to GFA’s silence, Compassion International has been quite vocal about the fact that the organization’s registration in India was .removed. For CI, the blow isn’t as dramatic since their operations are worldwide. However, most of GFA’s work in in India and their founder, K.P. Yohannan is a native of the Indian state of Kerala.

CI has offered donors the option to sponsor children in other nations and has been up front about it. GFA, on the other hand, has done nothing to alert donors who continue to give as if their funds are allowed to go into India. Compassion and GFA were registered under the same Ministry of Home Affairs and the removal of that registration has the same implications. Compassion is being candid and transparent; GFA is not.