On Monday and Tuesday, I posted screen captures of a new Ugandan tabloid called the Rolling Stone (no relation to the rock and roll magazine) which claimed to out gays and called for their death. Martin Ssempa gave an interview to the magazine and was touted for his anti-gay activism. 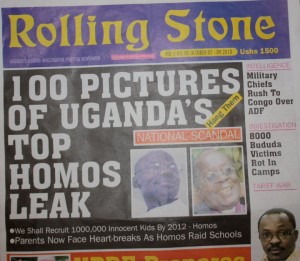 The tabloid claims to have another four parts to the outing campaign, with more pictures, names and addresses to come. Some of the Ugandan contacts I have corresponded with over the last 20 months have not been answering emails. This is concerning.

Since Canyon Ridge Christian Church has taken on an intermediary role with Rev. Ssempa, I asked Mitch Harrison at CRCC if he would determine whether or not Ssempa gave an interview to this magazine and whether he stood for the approach. This evening, Rev. Harrison provided a statement from Martin Ssempa about the tabloid and more. Here it is in full:

STATEMENT ON THE ROLLING STONE ARTICLE.

Dr. Martin Ssempa would like to disassociate himself from the “Hang Them” article which appeared in the ‘Rolling Stone’ Newspaper October 02-092010 issue. While he has been opposed to homosexuality as a sin, a cultural taboo, and an act that breaks the laws of Uganda, he does not support violent efforts of “hang them” as indicated in the Rolling Stone-a new sensational tabloid. Being an outspoken preacher on the subject, he was interviewed by a writer from the paper but his language and tone of message was unfortunately not portrayed.

Pastor Ssempa does not believe that outings in Newspapers is an appropriate method. Pastor Ssempa is counselling homosexuals and victims of homosexuality whose confidence he has kept until they have been willing to go public.

At a meeting last week, Dr. Ssempa spent three hours with leaders of homosexuals along with Bishop Ssenyonjo-explaining to them his position as a father. Homosexuality is a sin and God’s grace is there for all who need redemption. He shared how he counsels university boys and girls who are suicidal because they were raped in single sex boarding schools and no one was there to defend them. It is this that drives his passion for educational and legislative reforms to protect Africa’s Youths. The meeting ended on a pleasant note with Pastor Ssempa taking a group photo with the team.

In that interview, Ssempa is quoted as saying that “the war has just started.” If this is what he said, the tone and language are quite clear. I believe he should ask for a retraction and space in that paper to make his position clear. Telling an American audience is one thing; relating it back home is another.

The disclosure of a meeting with Bishop Ssenyonjo is interesting. I hope to hear from the Bishop about his reactions to it. Martin Ssempa should have found a receptive audience for his concerns about childhood molestation since all the gay advocacy groups issued a statement opposing recruitment and child molestation back in January of this year.

I hope this statement does not mean that Canyon Ridge is going to stick to the story that the Anti-Homosexuality Bill is about the molestation of the boy child. The laws in Uganda already allow for prosecution of those who molest children so if that is what drives him, then he can rest in his campaign since these laws are on the books.