Rodney Howard-Browne is a pastor on Donald Trump’s advisory committee who has come to Trump’s defense after Charlottesville. To give an example of how difficult it is going to be to make progress on the points I raised in my response to Charlottesville, I offer this tweet from Rev. Howard-Browne.

We strongly condemn all white supremacists, KKK, Antifa and Black Lives Matter, Main Stream Media in the strongest of terms !!!!!

I don’t care how bad you think the “main stream media,” BLM, and antifa are, they are not in the same moral league as the KKK and white supremacists. Let’s take the media for instance. The media documented the aggression of the white supremacists and the slow and confusing response of President Trump. They reported what happened.
On the other hand, Howard-Browne is simply repeating the narrative promoted by the white supremacists in Charlottesville. All throughout the League of the South, Daily Stormer, etc. websites is the story that they were innocent and the violence came from the counter demonstrators.
Rev. Howard-Browne should follow the Twitter feed of Daniel Hosterman who chronicled the aggression of the League of the South and other alt-right demonstrators. Here’s one with a white supremacist attacking a journalist.

Then there is this photo of a white supremacist pepper spraying a counter demonstrator.

A white supremacist discharges pepper spray into a group of protesters outside of their permitted rally area — li… https://t.co/pBwp9X9ts8 pic.twitter.com/olC1rGA3sZ

Since Howard-Browne blocked me, he probably won’t see this, but perhaps gentle readers could make sure he does.

Rodney and Adonica Howard-Browne are a husband and wife ministry team with a little more fame today. On Monday, Howard-Browne posted an Instagram  picture of him with President Donald Trump and the group of pastors and other court evangelicals who laid hands on Trump in the Oval Office.

I recognized the Howard-Brownes as recipients, along with Joyce Meyer and David Barton, of unearned PhDs from Life Christian University.

Life Christian University says these degrees are earned but the “students” don’t even attend the school. Due to Missouri law, evangelist Joyce Meyer had to stop claiming on her public website that the LCU PhD was earned. On the Howard-Brownes’ website, they claim to be “Drs.”

I can’t tell who all of these people are but I am pretty sure the Howard-Brownes aren’t the only ones claiming unearned doctorates. 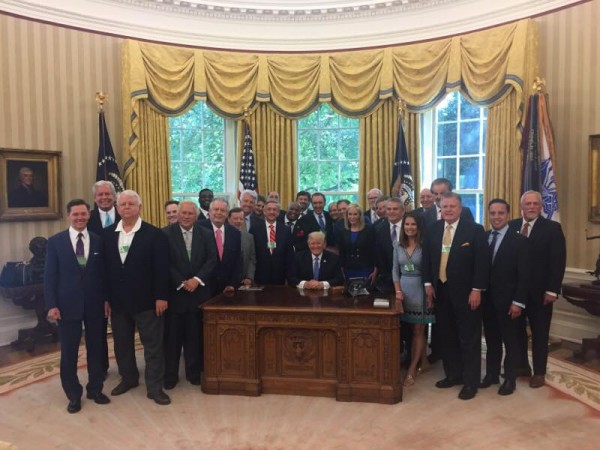