Via Michelle Malkin:
She said, he said…

HARRISBURG — A former staffer for an affiliate of the Association of Community Organizations for Reform Now testified today that the organization was provided a “donor list” from the presidential campaign of Barack Obama in late 2007 for fundraising efforts.
Anita Moncrief, a former Washington, D.C. staffer for Project Vote, which she described as a sister organization of ACORN, said her supervisor told her the list of campaign contributors came from the Obama campaign. Moncrief said she has a copy of a “development plan” that outlines how Obama contributors who had “maxed out” under federal contribution limits would be targeted to give to Project Vote, and that it was her job to identify such contributors.

The Obama campaign denies any coordination.

The New York Times woke up and published a story regarding ACORN that speaks to the kinds of problems that ACORN watchers have been discussing.
Project Vote and ACORN are so closely tied together that it seems difficult to say Project Vote hasn’t done partisan work. In addition, the Consumers Rights League has sworn affidavits from 4 former ACORN workers accusing ACORN Housing of funneling money to ACORN’s voter registration efforts.
The Times article is based on an internal report filed by Elizabeth Kingsley. In reviewing how ACORN actually functions, she found reasons for concern.

The June 18 report, written by Elizabeth Kingsley, a Washington lawyer, spells out her concerns about potentially improper use of charitable dollars for political purposes; money transfers among the affiliates; and potential conflicts created by employees working for multiple affiliates, among other things.

Ms. Kingsley’s concerns about the way Acorn affiliates work together could fuel the controversy over Acorn’s voter registration efforts, which are largely underwritten by an affiliated charity, Project Vote. Project Vote hires Acorn to do voter registration work on its behalf, and the two groups say they have registered 1.3 million voters this year.
As a federally tax-exempt charity, Project Vote is subject to prohibitions on partisan political activity. But Acorn, which is a nonprofit membership corporation under Louisiana law, though subject to federal taxation, is not bound by the same restrictions.

Barack Obama said on his website that he never organized for ACORN but he did for Project Vote. This report provides rationale for those who say Obama is splitting hairs.

Barack Obama’s Fight the Smears website claims he was never hired to be a trainer for ACORN.
However, evidence is pointing the other way. Here is what the Obama website says:

The truth is that Barack was never a community organizer or trainer for ACORN, and he was never employed by ACORN in any other capacity.

However, conservative Cleveland Leader has uncovered an article saying otherwise.

Let’s take a look at a quote from a 2004 article – Case Study: Chicago- The Barack Obama Campaign – written by Toni Foulkes, a Chicago ACORN Leader, which was published in the journal Social Policy. Did we mention that Social Policy recently pulled this particular article from their website, while leaving links to all other articles up?

“Obama took the case, known as ACORN vs. Edgar (the name of the Republican governor at the time) and we won. Obama then went on to run a voter registration project with Project VOTE in 1992 that made it possible for Carol Moseley Braun to win the Senate that year. Project VOTE delivered 50,000 newly registered voters in that campaign (ACORN delivered about 5,000 of them).
Since then, we have invited Obama to our leadership training sessions to run the session on power every year, and, as a result, many of our newly developing leaders got to know him before he ever ran for office. Thus it was natural for many of us to be active volunteers in his first campaign for State Senate and then his failed bid for U.S. Congress in 1996. By the time he ran for U.S. Senate, we were old friends.“

Not only does Foulkes boast of Obama’s ACORN leadership training, but also makes it clear that Obama’s post-law school organizing of “Project VOTE” in 1992 was undertaken in direct partnership with ACORN. The tie between Project VOTE and ACORN is also something that Obama and others have attempted to disprove in recent weeks as ACORN has come under fire for allegations of voter registration fraud.

Another strong supporter of Obama’s work–as an organizer, as a lawyer, and now as a candidate–is Madeline Talbott, lead organizer of the feisty ACORN community organization, a group that’s a thorn in the side of most elected officials. “I can’t repeat what most ACORN members think and say about politicians. But Barack has proven himself among our members. He is committed to organizing, to building a democracy. Above all else, he is a good listener, and we accept and respect him as a kindred spirit, a fellow organizer.”
Obama continues his organizing work largely through classes for future leaders identified by ACORN and the Centers for New Horizons on the south side. Conducting a session in a New Horizons classroom, Obama, tall and thin, looks very much like an Ivy League graduate student. Dressed casually prep, his tie loosened and his top shirt button unfastened, he leads eight black women from the Grand Boulevard community through a discussion of “what folks should know” about who in Chicago has power and why they have it. It’s one of his favorite topics, and the class bubbles with suggestions about how “they” got to be high and mighty.

Sure sounds like he was a trainer.
Project Vote
Obama’s website also claims that ACORN was not a part of Project Vote. The Social Policy article suggests that ACORN was involved.
It occured in reading this that Obama’s camp might come back and say he volunteered his time to ACORN, that he was never “hired” as in for money. So far, I have seen no answer from the Obama camp. If anyone reading sees a response, let me know.
Obama’s website does not address a related matter. In 1996, he did ask for help from the socialist New Party for “voter education and voter registration” efforts.

Barack Obama, victor in the 13th State Senate District, encouraged NPers to join in his task forces on Voter Education and Voter Registration.

It is hard to comprehend that he wouldn’t ask ACORN to help out with Project Vote since voter registration is what ACORN is known for.
And at least now, Project Vote is a part of ACORN. See this Sweetness and Light post for details on the relationship between Project Vote and ACORN. 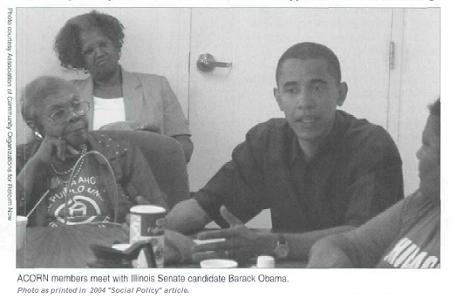 UPDATE: Gateway Pundit points out that the Obama campaign has altered the Fightthesmears website to make a play much in the way I suggested they might.