In the midst of his campaign for Ted Cruz, David Barton took some time to appear on Michael Brown’s Line of Fire radio show. While they didn’t mention my name, I suspect the Pennsylvania psychology professor was me. I did learn that I don’t hold to “basic Christian teachings” (which ones, David?) and that none of his critics were history guys. I don’t know how he sleeps at night.
He said a bunch of stuff he usually says (and which I have debunked) but, in light of Michael Brown’s praise of primary sources early in the program, I was struck by one quote Barton attributed to Jefferson.
You can go to the website to listen at 10:53 where they discuss using primary sources. Then at 21:06, Barton claims Thomas Jefferson said it was his duty as chief magistrate of America as a Christian nation to go to church. Below, I have both segments together in one clip.

When he became president for 8 years, he went there at the Capitol. When asked, ‘why do you attend church at the Capitol?’ he [Jefferson] said, ‘I’m the chief magistrate of this Christian nation and it’s my duty and responsibility to set this example and so Rev. Ethan Allen there in D.C. that’s who, he explained that to him. I’ve gotta make sure people see me going to church at the Capitol.

Off the cuff, Barton adds to the quote a little. He tells Brown’s audience that Jefferson said these words to Ethan Allen.* However, that is not what Monticello library documents. Monticello researched the following quote attributed to Jefferson:

Quotation: “Sir, no nation has ever yet existed or been governed without religion. Nor can be. The Christian religion is the best religion that has been given to man, and I as chief magistrate of this nation am bound to give it the sanction of my example.”

Monticello consulted the existing body of Jefferson’s writings and other papers where his statements are recorded. The first recorded instance of this quote is in 1857 in the papers of Allen. Monticello’s assessed the quote as “questionable.”

Comments:  This quotation appeared in a handwritten manuscript by the Reverend Ethan Allen (1796-1879). The story was related to Allen by a Mr. Ingle, who claimed to have been told a story that Jefferson was walking to church services one Sunday,
“…with his large red prayer book under his arm when a friend querying him after their mutual good morning said which way are you walking Mr. Jefferson.  To which he replied to Church Sir.  You going to church Mr. J. You do not believe a word in it.  Sir said Mr. J.  No nation has ever yet existed or been governed without religion.  Nor can be.  The Christian religion is the best religion that has been given to man and I as chief Magistrate of this nation am bound to give it the sanction of my example. Good morning Sir.”2
The story comes to us third-hand, and has not been confirmed by any references in Jefferson’s papers or any other known sources.  Its authenticity is questionable.

So after claiming the scholarly high ground as someone who uses primary sources, Barton used a questionable quote which comes to us third-hand.

*This is Ethan Allen the Episcopal priest and church historian. Allen was born in 1796 and would been a young boy when Jefferson was president and so Jefferson did not utter this quote to Allen who didn’t come to Washington, D.C., until long after Jefferson retired to Monticello.

While visiting Colonial Williamsburg yesterday, I ran into a surprising display. See below: 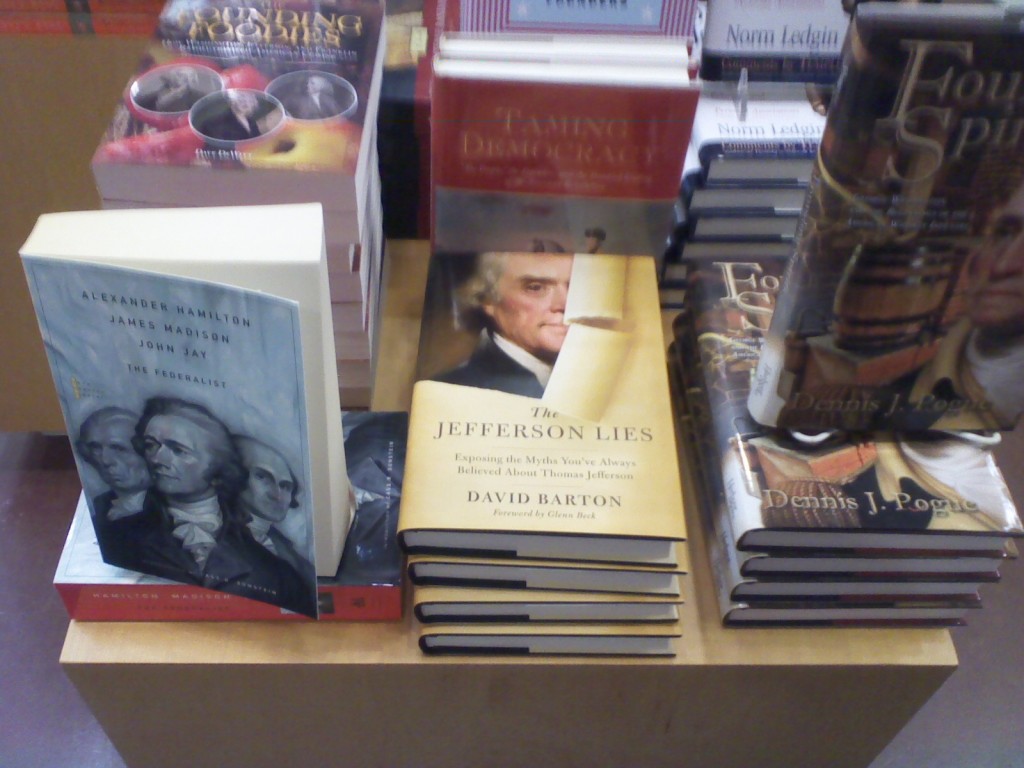 The Jefferson Lies was on a prominent display along side other legitimate books of scholarship in the Williamsburg Visitor’s Center bookstore. When I talked to the manager about the book, he was sympathetic but said there was nothing he could do, saying such books are included as a business decision.

Idealist that I am, I was disappointed to see it there. Gentle readers, weigh in. Should I be surprised? Am I expecting too much of a place which strives for historical integrity to have those values spill over into decisions about which books to carry in the book store? I was at Monticello yesterday also and the bookstore there did not carry the book; why should Williamsburg?