Stories passed along from one person to another often vary significantly from the original telling. Over time, paraphrasing the work of other people can lead to some interesting but incorrect stories being passed down as fact.  Mark Driscoll’s books Real Marriage and Religion Saves contain illustrations of this telephone game in writing.
On January 21, I wrote about remarkable similarities between Driscoll’s Real Marriage and Leland Ryken’s book Worldly Saints.  In that post, I also noted another book apparently consulted by Driscoll based on the similarity of wording regarding a story about St. Francis of Assisi. On page 115, of Real Marriage, Driscoll claims:

Saint Francis made women out of snow and then caressed them in order to quiet the lust that burned in him.

This phrasing seems much like Shadia Drury’s wording in her book Terror and Civilization. On page 96, Drury writes:

Saint Francis tried to cool the lust that burned within him by caressing figures made of snow.

In her book, Drury cites a 1960 book by William Lazareth titled Luther on the Christian Home as the source of that information. On page nine of that book, a paragraph briefly surveys the views of the church fathers on sexuality: 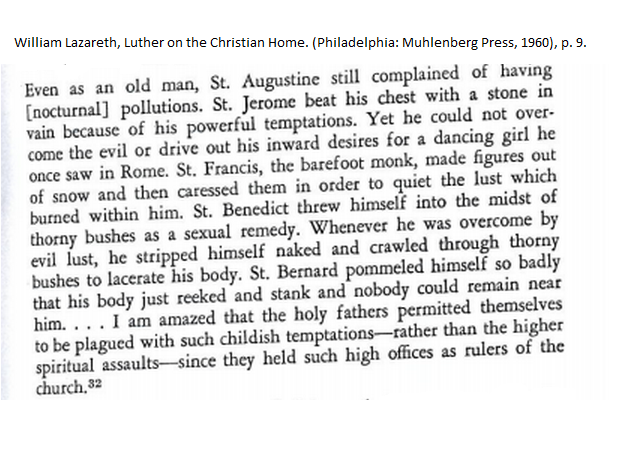 You will notice that this survey from Lazareth resembles various statements in Real Marriage and in another Driscoll book Religion Saves (click the links to see those books). The footnote in Lazareth leads to volume three of the six-volume Works of Martin Luther published in Germany between 1912-1921. The paragraph above is Lazareth’s translation of a paragraph by Luther dated 1538. Luther says Francis made “schneeballen” (snowballs) and “herzet und kusset” (hearted and kissed) them until his lust passed. However, the story is told differently by Celano, Francis’ biographer. Celano wrote:

How the devil, calling to Francis, tempted him with lust, and how the saint overcame the temptation
116 At the hermitage of the brothers at Sartiano, he who is always envious of the children of God, presumed to do the following against the saint. For seeing the saint continuing to increase in holiness and not neglecting today’s profit for yesterday’s, he called to Francis at prayer one night in his cell, saying three times: “Francis, Francis, Francis.” He answered, saying: “What do you want?” And the other: “There is no sinner in the world whom the Lord will not forgive if he is converted; but whoever destroys himself by harsh penance will not find mercy forever.” Immediately the saint recognized the cleverness of his enemy by a revelation, how he was trying to bring him back to lukewarmness. What then? The enemy did not stop short of inflicting upon him another struggle. For seeing that he could not thus conceal his snare, he prepared another snare, namely, the enticement of the flesh. But in vain, for he who had seen through the craftiness of the spirit could not be tricked by the flesh. The devil therefore tempted him with a most severe temptation of lust. But the blessed father, as soon as he noticed it, took off his clothing and beat himself very severely with his cord, saying: “See, brother ass, thus is it becoming for you to remain, thus is it becoming for you to bear the whip. The tunic belongs to the order; stealing is not allowed. If you want to go your way,
117 But when he saw that the temptation did not leave him in spite of the scourging, even though all his members were marked with welts, he opened his cell and went out into the garden and cast himself naked into a deep pile of snow. Then gathering handfuls of snow, he made from it seven lumps like balls. And setting them before him, he began to speak to his body: “Behold,” he said, “this larger one is your wife; these four are your two sons and your two daughters; the other two are your servant and your maid whom you must have to serve you. Hurry,” he said, “and clothe them all, for they are dying of cold. But if caring for them in so many ways troubles you, be solicitous for serving God alone.” The devil then departed quickly in confusion, and the saint returned to his cell glorifying God. A certain spiritual brother, who was praying at the time, saw the whole thing by the light of the moon. But when the saint found out later that this brother had seen him that night, he was greatly distressed and commanded him to tell the thing to no one as long as he lived in this world.

So passing down the story from Celano to Luther, and then from Luther to Lazareth, from Lazareth to Drury (or Driscoll) and from (possibly Drury) to Driscoll, the story changed a lot. Apparently, Luther adding the part about affection being applied to snowball people. By the time Driscoll told the story, St. Francis was making snow women to fondle.  While I don’t necessarily believe the original story, I think the strange retelling of the story may say more about Rev. Driscoll than St. Francis.
Before I leave this, I want to mention another odd story in Religion Saves on pages 186-187. According to Driscoll,

In the Victorian age, modestly became so extreme that long tablecloths were put over tables to hide the table legs for fear that men would see them and think of women’s legs and then lust.

This tale is generally considered to be false and may have come from the notes of one of two French writers, either Flora Tristan or M. Larcher (Pierre-Henri Larcher). According to this 1860 essay in Charles Dickens’ magazine All The Year Round (Vol. 4, p. 142-144), these French writers had misconceptions of the English. Dickens (or another unnamed writer) makes fun of the observations of the French writers by giving account of all the characteristics supposedly displayed by the English. The relevant section is here:

Cutting the leaves of this veracious volume in a sleepy, indolent kind of manner, I am suddenly aroused by finding that I never take off my hat to a lady, but only to a horse the reason being, that a woman causes me to spend money, and a horse causes me to gain it:wherefore I love, pat, and caress my horse, but in no wise love, pat, or caress my wife ; nor do I salute any lady whatsoever, but only my favourite racer. I also find that my wife and sisters put trousers on the legs of their pianos, chairs, and tables; that they never talk of the leg of a fowl, or ask for a slice of leg of mutton, but prefer a modest request for the limb of a chicken, and desire a little slice of that limb of mutton. Anything else would be “very shocking,” and would put English prudery quite out of countenance.

This English magazine article appears to sarcastically dismiss the French account. I can’t find any historical accounts which support the claim. While it may be a small historical point, it is not possible to research Driscoll’s claim since he does not provide a source.  I suspect a telephone game style changing of the original observations to the questionable story told by Driscoll.