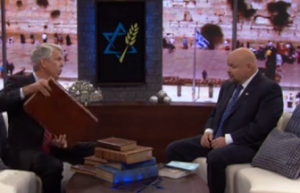 I had a hard time with the title for this one.
In a video dated today but out last week, Trump supporting self-styled historian David Barton told a Jewish Voice audience that the Constitution contains the exact words of the Bible and that his book The Jefferson Lies corrects the record on Jefferson. Often Barton says The Jefferson Lies was pulled from publication by publisher Thomas Nelson because liberals and pagan professors were out to get him. However, the Jewish Voice promo for the book takes the conspiracy theory to a higher level. Watch:

After watching this video, now I understand that:
There is a secret plan to remove Christianity from American history. I am skeptical about this since Barton and now the Jewish Voice know about it. It can’t be a complete secret. Wait! Maybe they are in on it!
Thomas Jefferson based his leadership on the Hebrew Scriptures?! That seems to be a stretch since Jefferson didn’t think very highly of the Old Testament. For instance, he told William Short in 1820 that the Hebrew Scriptures weren’t inspired.

The whole religion of the Jews, inculcated on him from his [Jesus] infancy, was founded in the belief of divine inspiration. The fumes of the most disordered imaginations were recorded in their religious code, as special communications of the Deity; and as it could not but happen that, in the course of ages, events would now and then turn up to which some of these vague rhapsodies might be accommodated by the aid of allegories, figures, types, and other tricks upon words, they have not only preserved their credit with the Jews of all subsequent times, but are the foundation of much of the religions of those who have schismatised from them.

In the same letter, Jefferson also had this to say about Jehovah:

His [Jesus] object was the reformation of some articles in the religion of the Jews, as taught by Moses. That sect had presented for the object of their worship, a being of terrific character, cruel, vindictive, capricious and unjust.

The removal of The Jefferson Lies from publication was apparently a part of the secret plan to slander great men of faith. Reading the book will bring revival, according to Jonathan Bernis.
I must be an anti-Christian part of the plan, even though the plan was kept secret from me. I will have to ask John Fea, Thomas Kidd, and Gregg Frazer if they knew anything about it. I can tell you I will be pretty mad if I find out that I was involved in a secret plan and those guys didn’t say anything.
Everybody opposed to David Barton must be in on the plan and are anti-Christian.
If I give lots of money to Jewish Voice and buy The Jefferson Lies, then everything will be better.
Jewish Voice raked in over $30 million in 2014 so no wonder Barton wants to sell the book on the show. That will buy a lot of tin foil and pay Mr. Bernis just under $250k/year and allow for a $850k loan from Jewish Voice to Bernis to buy a house.