Yesterday, Gospel for Asia linked to a list of ministry leaders who endorsed GFA’s work. Today, that link is missing and the endorsements have been pulled from the page.
The page yesterday looked like this: 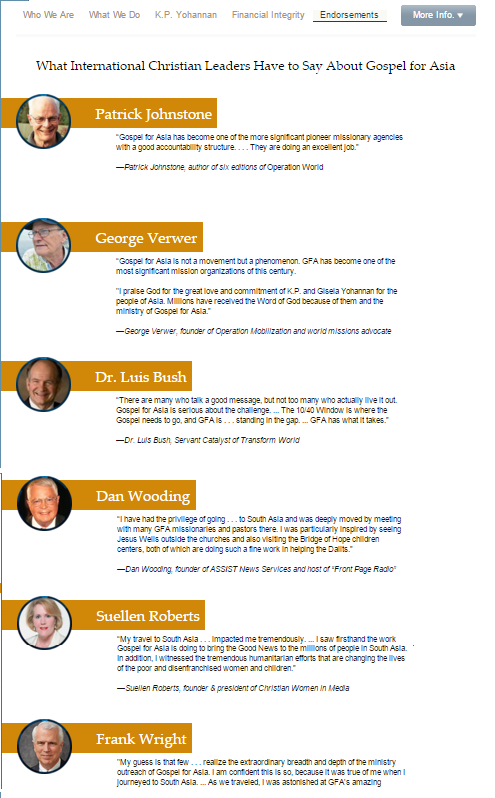 All endorsements are missing and the link to the page is missing.
Recently George Verwer told me that he continued to support GFA and so this action may not reflect the feelings of all endorsers. For whatever reason, GFA has removed the information and a prominent link to the modified page
UPDATE: The page may have just been moved rather than deleted. It can be viewed here now. The church endorsements page contained mostly pastors at one time. See this 2014 page, and then this one in May, 2015. Note how many original endorsers are now missing.


Gospel for Asia has a long history, having been founded by K.P. Yohannan in 1978. Terrol (Terry) Jones is a missions advocate who served at GFA from 1984 through 1993. Jones recently wrote a letter to George Verwer, an endorser of GFA and the man who has served as a lifelong mentor to GFA founder and director K.P. Yohannan. Verwer is also the founder of Operation Mobilization. In this email which was addressed to Verwer and several others, Jones calls on Verwer to remove his endorsement of GFA. Jones also addressed the letter more widely to the body of Christ.
It is hard to put into perspective how disheartening GFA’s public fall has been to long time mission watchers and leaders. When a person like Terry Jones comes forward with a public call like this, the situation is grave.

Terry Jones became a Christian while he was a sophomore at Tulsa University through the witness of a Campus Crusade for Christ staff member.  He was graduated from TU and Asbury Theological Seminary.  Terry served 15 years in United Methodist Churches and non-denominational churches.  He worked with Operation Mobilization for two years in India and has lived a composite of 9 years in Sri Lanka and India.  He married Pattie in 1980 and they moved to Sri Lanka where he taught at Lanka Bible College eventually for 5 years.  From 1984 through part of 1993 he worked with K.P. Yohannan and Gospel For Asia as Church Coordinator establishing relationship with churches throughout North America.  He and Pattie are still very much involved with national missionaries in India and Sri Lanka especially, traveling there at least twice a year for a month at a time.
As always, I call on GFA leaders to respond and provide answers to the growing list of concerns which have surfaced over the past two years.