The other APA (the psychologists) has now commented on the appointment of Ken Zucker to the psychiatrist’s APA DSM task force.

American Psychological Association
Office of Public Affairs
(202) 336-5700
Public.affairs@apa.org
Statement on Gender Identity Disorder and the Planned Revision of the Diagnostic and Statistical Manual
May 2008
There has been some recent confusion regarding the American Psychological Association and work being done on the next version of the Diagnostic and Statistical Manual (DSM). The DSM is a publication of the American Psychiatric Association, not the American Psychological Association (APA). Questions regarding the DSM-V and the Sexual and Gender Identity Disorders Work Group should be directed to the American Psychiatric Association.
For many years, the American Psychological Association has worked to end discrimination, including discrimination based on sex, gender identity and sexual orientation. APA is committed to taking a leadership position among the mental health professionals, scientists and scholars who are addressing the issues surrounding gender identity and transgenderism. APA formed a task force in 2005 to study gender identity and gender variance. This group has been reviewing both the scientific literature and APA policies related to these issues and developing recommendations for education, training, practice, and further research.
The task force has completed a report that is slated to be presented to APA’s governing Council of Representatives in August. It will make a series of recommendations, including that APA call upon psychologists to provide appropriate, nondiscriminatory treatment to all transgender and gender-variant individuals. It is expected that the Council will adopt the report and its recommendations.
The task force did not take a position with regard to the gender identity disorder diagnosis because there was no consensus among its members. Indeed, there is no consensus among professionals working in the field; reputable scientists continue to disagree about GID. Regardless of the disagreement concerning the GID diagnosis, there is a need for greater consensus on treatment of gender dysphoria. The task force strongly supports the development of practice guidelines for transgender clients.
APA believes that no psychological disorder should be stigmatized or used as the basis for discrimination. People who are concerned about issues having to do with their gender identity should have access to appropriate and non-discriminatory treatment. Mental health providers need to educate themselves about how to provide such care.
Responses to Possible Questions:
Q.What is the American Psychological Association’s position with regard to the appointment of Dr. Kenneth Zucker and Dr. Ray Blanchard to the work group reviewing GID? Are you actively working to have them removed?
A. APA is pleased that well-qualified psychologists who are also members of APA have been included in the leadership of this aspect of the DSM revision. We are also aware that there are substantive disagreements in the field over the GID diagnosis and over the treatment of gender dysphoria. We call on this group and others working on the new DSM to apply the highest professional standards in reviewing the science and we encourage the careful consideration of all legitimate perspectives.
Q.Why did the American Psychological Association allow Dr. Kenneth Zucker to be part of its task force on gender identity?
A. APA’s Task Force on Gender Identity was given a very specific charge — to complete a review of the research literature on gender identity and transgenderism and to make recommendations based on that review. Nominations to the Task Force were widely sought and appointments to the task force, including that of Dr. Zucker, were made through a very thorough review process based on an individual psychologist’s research, clinical expertise and experience. As is the case with all APA task forces, the final work product is grounded in the strongest, peer-reviewed science available and undergoes a rigorous review process within the APA governance structure before it can become APA policy. Ultimately, what becomes APA policy must be well-grounded in science not individual opinion.

UPDATE – Elsewhere the American Psychiatric Association issued a statement reviewing the credentials of Dr. Zucker, which are impressive indeed.

We have been talking about it just about non-stop here and MSNBC’s Brian Alexander takes a look at the GID-DSM controversy in this piece – “What’s ‘normal’ sex? Shrinks seek definition.” 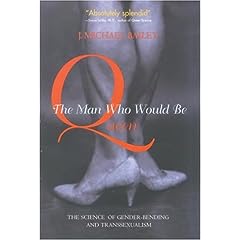 PS – Much has gotten in the way of the second part of Danielle’s remarks on gender identity issues, but they are coming soon…

Christianity Today has an article (The Transgender Moment) and sidebar (Walking a Fine Line) (apparently these are in the print and online editions) quoting me and many others regarding transgender issues. Some have contacted me to ask if I was quoted correctly, feeling perhaps that my comments were inconsistent with my views expressed elsewhere. Here are my comments from “The Transgender Moment:”

Whether mentioned in Scripture or not, the transgender movement clashes with traditional Christian theology that teaches the only God-given expression of human sexuality is between a man and woman who are married.

“Transgender impulses are strong, but they don’t match up with the Christian sexual ethic,” says Warren Throckmorton, associate professor of psychology at Grove City College in Pennsylvania. “Desires must be brought into alignment with biblical teachings, but it will be inconvenient and distressful.”

Throckmorton, past president of the American Mental Health Counselors Association, says he has advised transgendered people who are in absolute agony over their state. Typically, such individuals are desperately in search of hope and acceptance, he says. It may be uncomfortable to tell transgendered individuals that their desires don’t align with the Bible, Throckmorton says, but pastors must do so. “Even if science does determine differentiation in the brain at birth,” Throckmorton says, “even if there are prenatal influences, we can’t set aside teachings of the Bible because of research findings.”

While I don’t remember saying these exact things, I think the biggest problem in order to understand my views on this topic is the absence of the context for these remarks. I do remember saying in my interview with John Kennedy that each situation was different and that each person experiencing gender conflict should consult with medical specialists, psychological professionals, and clergy. Some people may come to the conclusion that the Scriptures are silent on what they should do about their feelings. However, for those who do come to the conclusion that various options are not permitted by Christian teaching, the conflict can be agonizing. For those people, bringing desires into alignment with the teaching they believe to be correct is difficult but these individuals may come to see it as their calling to live out. In this article, I am speaking as if this context has already been set.

In practice, I believe mental health professionals should take the same perspective regarding transgender issues as I have advised with sexual orientation in the sexual identity framework – the client sets the value direction. Pastors, however, are more likely and indeed are called upon to interpret doctrine and the relevance of doctrine for action. I do not think research findings supporting an innate source of gender identity conflict is likely to sway pastoral advice much, in the same way that finding an innate source of homosexual attractions is unlikely to change traditional views.

Perhaps the quote that I feel the most troubled by is this one: “Transgender impulses are strong, but they don’t match up with the Christian sexual ethic.” I don’t remember saying it that way but if I did, I would certainly say it differently now. As I see it, impulses are not of the same moral significance as behavior, especially chosen behavior. I do not see sexual or gender inclinations as being chosen. What one does may or may not match up with a Christian sexual ethic, but I do not view feelings in the same manner. In any case, I want to emphasize that persons who experience gender identity conflicts should reach out and seek advice from medical and mental health professionals, as well as their spiritual advisors.

Now I suspect for some this will not be a sufficient reaction to this article. I invite readers to discuss the issues raised in the article. I invite clergy and transgender advocates to comment and offer rationale for their views. Some think I need educated; so educate me.

With the passage of the transgendered recognition bill in Montgomery County, MD yesterday, a public interest law firm, Advocates for Faith and Freedom is prepared to sue the county on behalf of PFOX, a church and the Woman’s Christian Temperance Union of MD. One specific concern is the lack of exemption for religious groups and organizations. Would religious groups be required to accommodate conduct or dress they ordinarily would prohibit?

The AFF legal analysis and letter to the Montgomery County, MD board is here.