Last night Mark Driscoll was invited on stage at the Gateway Conference hosted by Robert Morris. He said several things which were amazing but there was one thing which seemed to put Mars Hill Church a great distance in the rear view mirror. At 2:59 into the clip, Driscoll said:

…for me I’m in a season of just uh healin’ up, praying. Uh, asking the Lord Jesus through wise counsel to show me any blindspots where I can grow.

Just over a week ago, his elders offered him some wise counsel. The wise counsel was a plan to help him with “blindspots” where he could grow. Instead of taking the wise counsel, he resigned.
Robert Morris told his crowd that he knew the whole story. However, he said this:

Uh here’s what I figure. We’ve got two choices. One is we could crucify him (pause). But since someone’s already been crucified (hollering)for him (applause, hollering). The other choice is we could restore him with a spirit of gentleness considering ourselves, lest we are also tempted (applause). It is very sad that in the church we’re the only army that shoots at our wounded.

Restoration is exactly what the Mars Hill elders said they had in mind. No crucifixion planned as far as I know. Perhaps Driscoll prefers a different kind of restoration.
“This isn’t the wise counsel you are looking for.”
[youtube]http://youtu.be/2ZVtuOIrrDg[/youtube]

Didn’t take long.
At his Gateway Conference, Robert Morris invited Driscoll on stage for a brief talk. Video below.

Since someone’s already been crucified for him, let’s restore him with a spirit of gentleness @PsRobertMorris introing Mark Driscoll #GC14
— CharlesCampbell (@charl3scampbell) October 21, 2014 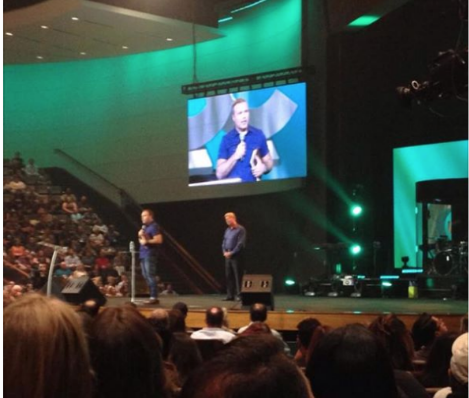 [youtube]http://youtu.be/2ZVtuOIrrDg[/youtube]
Click here to read the transcript of the Morris and Driscoll.
Supply caption here.
Don’t know what to think about Driscoll’s stories. If true, I hope the rock throwers get the maximum penalty.