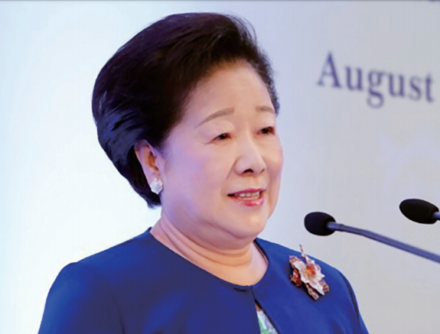 On November 12, Bishop Noel Jones, pastor of City of Refuge Church in Los Angeles and gospel singers Yolanda Adams and Hezekiah Walker will support the Unification Church as the church brings the “Only Begotten Daughter of God” to the Nassau Coliseum in Long Island for an evangelistic rally titled “Peace Starts with Me.”

Hak Ja Han Moon, the widow of Unification Church founder the late Sun Myung Moon, is called “True Mother” by the Unification faithful (Mr. Moon is True Father). True Parents are considered to be God’s chosen vessels to bring peace to the world and succeed in that mission where Jesus failed. The Unification Church hopes to use the Nassau event (and a similar one held in 2017) to enter the American religious mainstream and gain converts for their movement. Surprisingly, they have been getting help from several high profile Christians.

Who is True Mother?

In essence, Unification theology compensates for what Sun Myung Moon considered to be the failure of Adam and Eve, and then Jesus to accomplish God’s mission on earth. Moon (True Father) and his wife (True Mother) are the fulfillment of that plan and will successfully bring heaven on earth (known as Cheon Il Guk).  The Unification Church hopes to unify all religions around Moon’s Divine Principle and establish world peace.  According to them, Christians are misguided about Jesus.

In a March 2018 speech, the same Hak Ja Moon who will be exalted in Nassau said that blasphemy against her will not find salvation.

The Messiah; all of humanity yearns for the Messiah and the advent of the Messiah should at least take place at the national level. Unfortunately, 2,000 years ago, even though Heaven worked to prepare the people of Israel, they failed in their responsibility and Jesus could not stand on a national level and emerge as the True Parent. Hence, [Jesus] prophesied that he would come again. Therefore, with regards to Heaven’s providence, when looking at the 2,000 year history of Christianity, what is more important than the Second Advent of the Messiah, is the advent of the Only Begotten Daughter who comes from Heaven’s lineage with no relations to Satan, just as Jesus did 2,000 years ago. Unless the Only Begotten Daughter is born, the returning Messiah cannot advance to the position of True Parent.

In the gospel of Matthew, it is written that people can be forgiven for slandering the Messiah. However, whoever blasphemes against the Holy Spirit cannot be forgiven. Do you remember this passage? This means that with regard to the history of the providence of restoration through indemnity, we are in the Last Days. Whoever blasphemes against the Only Begotten Daughter, True Mother shall find no salvation. You must understand this. We are in the Last Days. Do you understand?

Was Jesus welcomed? Jesus Christ was not born to be crucified. He came to realize God’s dream and humanity’s wish for all human beings to become sons or daughters of God. He came to guide and lead people to become God’s children. Where did the theory that states that believers can only receive salvation through the crucifixion and blood of the cross, come from? They did not understand Jesus’ true nature. Human beings have institutionalized salvation through priests and bishops, resulting in many problems during the past two thousand years. However, the Protestantism did not express understanding of Jesus’ true nature. Protestants did not know why Heaven’s providence led to sending the Messiah. Jesus died on the cross and said he would return. He would return to host the marriage supper of the Lamb.

After waiting for two thousand years, was Christianity prepared to welcome Jesus? This is the issue. Fallen humanity cannot directly return to God. That is why fallen humanity needs the Messiah. The Messiah is humanity’s True Parents who can resurrect, revive and guide humanity to become God’s children once again. Heaven’s providence must reach its conclusion; therefore, the providence has advanced even with endless waiting and numerous difficulties. Thus, for the fulfillment of the providence, Heaven has prepared a foundation for True Parents to be born. The central figures are the True Parents and I am God’s only daughter, the True Mother.

While waiting for the returning Lord in his Second Coming, Christianity’s mission was to find and raise God’s only daughter. That they still do not understand the providence is phenomenal. I can no longer delay the providence. Six years ago, I proclaimed a new era by announcing that I am God’s only daughter, for whom Heaven has been searching and the returning Messiah has been waiting. (p. 15)

Death on the cross was not the original plan according to Hak Ja. But since he did die, a Messiah is needed now, and that Messiah has come in the form of True Parents. With True Father gone to the spirit world, the mission of Christianity isn’t salvation through the cross but to find and raise God’s only daughter. God’s daughter is humanity’s True Mother who is here now to usher in God’s kingdom of peace.

In Unification scripture, Hak Ja is referred to as God’s Only Begotten Daughter. She is also referred to, along with her husband, as the only hope for mankind.  Notice that the second passage from Chambumo Gyeong is from “True Mother.”

In 2012, almost two months after the death of her husband, Hak Ja ridiculed “old-fashioned Christians” who waited for the return of Jesus. She chided them for not recognizing that “The Lord (her husband Sun Myung Moon) came and went” while they lived. She said Christians waited two thousand years “for nothing.” She added that she planned to create a book which will make them throw away their Bibles. As quoted in the November 2012 issue of Today’s World, Hak Ja said on October 27, 2012:

That is why I am doing so many things now. It is all for you and your future generations. How could you possibly deal with the Christians of today? Not knowing that the Lord has come again, those old-fashioned Christians hang on to their worn-out Bibles and offer prayers and devotions asking the Lord to come on the clouds. If they come to understand the providence, how much will they repent and lament? “The Lord came and went while I was still alive!” How devastated would they be by that thought? This fact would dumbfound them more than the fact that they waited two thousand years for nothing. I will create a book that will make them throw away their Bibles, a book that will make them feel that Father is eternally alive.

This book is the Cheon Il Guk Holy Scriptures and was completed in 2015. The video clip above contains readings from it. Given these concepts, it is surprising and disturbing that high profile Christians would enthusiastically support the Nassau rally.

The rally is central to church plans for mainstreaming their views. In a September sermon a Unification church service in New Jersey, Family Federation Vice President Demian Dunkley created enthusiasm for the Nassau visit by chanting repeatedly that “True Mother is coming.” He also spelled out the importance of the Nassau rally for the movement by telling the crowd that the 2017 Madison Square Garden meeting and other prior meetings around the world led by Hak Ja Moon had helped convince world leaders that Unificationists could be trusted not to be “some crazy cult.” In light of those successes, Nassau will be even more important.

So what do you think Nassau is going to do? Do you understand how important it is? It’s protection for our world wide movement. It’s an investment for our world wide movement. It’s the elder son’s [United States is considered an elder son nation to Korea which is the promised land] responsibility to welcome True Mother on behalf of America and raise her up publicly, not at a private party.

There is precedent for this use of public events within the Unification Church. On March 23 2004, the church arranged an event in the Dirksen Senate Office building which church leaders later portrayed to insiders as the crowning of Moon and his wife as the “King and Queen of Peace.” At that time, Moon declared himself Messiah and humanity’s savior at a ceremony attended by several U.S. lawmakers and international representatives.

Have Jones, Adams, and Walker Converted to Unificationism?

I attempted to contact Noel Jones, Yolanda Adams, and Hezekiah Walker through their websites. Noel Jones operations manager got back to me to clarify my questions but I have yet to get any answers from any of them about their support for the event. They are obviously scheduled to be there but I would like to understand their rationale for evangelizing another religion, unless of course, they have converted, which they should disclose.

To be sure, Christianity and Unificationism are two different religions. In Christianity, Jesus is Savior and only Lord. In Unificationism, he didn’t achieve his mission and God’s only begotten daughter is here to establish peace on earth.

Although I wouldn’t attend if it was simply an ecumenical expression of a desire for peace, it isn’t just that. Let’s be clear that the church is hoping that this event and the Christian cover given to it will help them become more mainstream and help them grow their movement.