I have attended Christian churches since high school. Never have I attended a church or even heard of one where the pastors and elders know what members donate to the church. I have been in leadership in three churches as a deacon or elder, I have never known what anyone else donates. Only the treasurer in these churches has that knowledge and it is carefully guarded. Church boards I have served on get monthly financial reports but these are only summaries; there is no means to know who gives what.
Thus, I was surprised to learn that Mars Hill Church leaders give lead and executive pastors at each campus a list of donors each week who give over one thousand dollars. There are also top 25 donor lists for the year; kind of a billboard chart for givers. I recently obtained several of these lists for the years 2011 – 2012. I don’t know if this is done in 2014, but pastors who left in 2013 say it was done then.
The images below don’t show much because I didn’t want to indicate any identifying information. The first one contains the “Top 25 Donors” at the Shoreline campus for most of 2011. 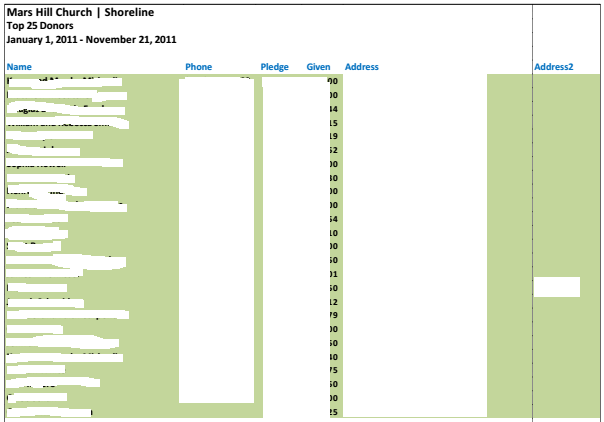 Each week, lead and executive pastors get reports of giving at each campus:

These  lists include total giving to all locations as well. I suppose those donors would be in the Hall of Fame. Although shadowy, I have heard that a small group of donors, called the Lucas Group, are called on when times are hard. Those at the top, including current Board of Advisors and Accountability member and owner of Seattle-based Storyville Coffee Jon Phelps, have helped keep Mars Hill afloat.
Perhaps other megachurches do this. To me, this practice invites the violation of impartiality (James 2*). Pastors and other leaders might give more attention to those who show up regularly on these lists. In fact, former pastors have told me that they were asked to give attention to regular donors and felt pressure to make a quota of giving for their campus.
One evidence of at least some special access is a letter from Bellevue pastor Thomas Hurst to potential donors regarding the goal of $40 million to purchase and renovate a property in Bellevue.
One former lay leader, Shawn Nickerson, left Mars Hill Church because he believed partiality was being shown to wealthy givers. Nickerson explained, “This practice is what made up my mind to leave after I was not heard out. There was blatant catering to the high dollar or potential high dollar donors” by pastors at his location. He added, “Wealthy families and couples were being invited out to dinner with the church leadership, while it was unheard of to even get a coffee date with my pastor,and I was in a senior lay position. We were definitely briefed to keep encouraging giving and it became a mantra.”
A former pastor told me that the executive elders hosted “vision breakfasts” for the top 25 donors. This practice continued until some pastors complained about the partiality. He added, “If you are one of the top givers across Mars Hill, you then get invited to the Lucas group and get to have special access and regular meetings with the executive elders.”
Sutton Turner wrote an article for The Resurgence website which make a sin of “reverse partiality.” In some universe, Turner believes that wealthy people are ignored at church and so pastors need to make an effort to reach out to them. Turner wrote:

When a pastor meets with someone who is poor or middle-class, we call it discipleship. When a pastor meets with someone who is rich, we call it partiality. This double standard leaves a portion of the church body without a shepherd, and these are men and women who often struggle mightily to find meaning and identity in Jesus rather than their possessions. It meant a great deal to me the first time my pastor sent me a text message to let me know he was praying for me.

We (whoever we are) would only call such meetings partiality if they are like the ones described by the former pastor and Shawn Nickerson – by invitation because of one’s wealth. This is one megachurch method that I hope is not widespread and if it is should be scrapped.
*James 2:1-4

My brothers and sisters, believers in our glorious Lord Jesus Christ must not show favoritism. 2 Suppose a man comes into your meeting wearing a gold ring and fine clothes, and a poor man in filthy old clothes also comes in. 3 If you show special attention to the man wearing fine clothes and say, “Here’s a good seat for you,” but say to the poor man, “You stand there” or “Sit on the floor by my feet,” 4 have you not discriminated among yourselves and become judges with evil thoughts?