According to one protester, the police arrived to tell the picketers that the sidewalk was public property. On person on the scene estimated that about 40 cars were in the parking lot about 15 minutes before the service, some with Washington plates. Another thought more like 70 cars were in the lot by the beginning of the service.

Driscoll says he has not been served the lawsuit. Then he says the charges are false and malicious. If he doesn’t know anything about it then how can he say anything about the nature of the charges. We know that the church used Result Source to prop up his book. He admitted that and stopped using the description of bestselling author because the scheme was made public. Furthermore, it is well documented that Mars Hill lawyers warned Sutton Turner against revealing how much of the Global Fund went to international mission work.

Plans are still coming together but at least one protestant will greet the Easter Sunday meeting of The Trinity Church on Sunday. Las Vegas resident and Mars Hill critic Bob Sluys plans to show up at The Trinity Church with signs to express his views about Mark Driscoll’s new venture.
Sluys has been busy making signs for the grand opening. 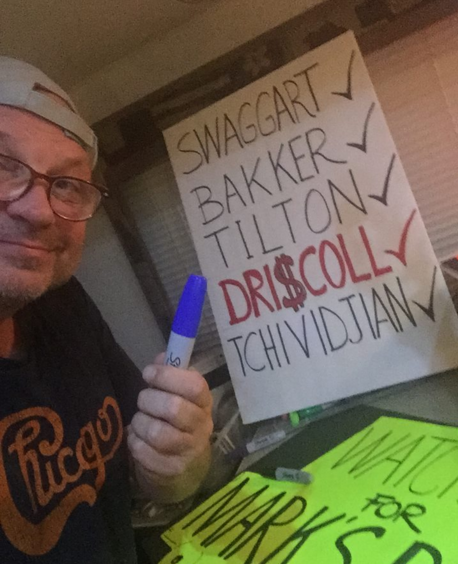 Driscoll has been advertising the first meeting with promises of a “free carnival.”

First ever info mtg for The Trinity Church in Scottsdale Sun 5pm… pic.twitter.com/0LMOpaVHX3

Well, everybody loves a carnival.
Those interested in what Sluys is doing, can contact him via email.

If Bob Sluys has his way, the necessary funds will be raised and a group of plaintiffs will bring the RICO lawsuit. For  more on the suit’s logic see this prior post (here also). Sluys created a video outlining the reasons he believes make the suit necessary. Watch:
[youtube]https://youtu.be/iX9ccY-uJ54[/youtube]
About half of what is needed has been raised.
The church is apparently still disposing of assets without a public accounting of the Global Fund and where the disposed assets have gone.
The plaintiffs offered (and presumably still would pursue) mediation without success.
It appears that the basic question is: Did any church leaders use church funds to personally enrich themselves?