Oh I see how it is. Mike Bloomberg’s past harassment allegations get some press and Eric Metaxas finds his moral concern.

Metaxas and other Trump court evangelicals will be severely blasted if they try to play the morality card on Trump’s opponents during this election. They can’t really do it with a straight face. I suspect Metaxas only wrote a muted “whoa” because he knew he would be ridiculed unmercifully if he went for a stronger condemnation.

Recently CBN’s David Brody (a supporter of Trump) acknowledged that making an issue of Pete Buttigieg’s sexuality was not a winning play for Trump supporters since Trump has no moral high ground. Watch:

Brody just ruled out this out as a plausible strategy given Trump’s questionable behavior. I don’t think Bloomberg is going to prevail, but I can’t see how Republicans can make an issue of it if he does.

Glad to visit with @realDonaldTrump to discuss how this administration is advancing conservative policies. It is clear to me the impeachment is less about the president and more about his pro-life, pro-family policies.

Perkins says the reason the Democrats want to impeach Trump is due to his support for pro-life, pro-family policies. Odd, absolutely nothing has been mentioned about those policies in the numerous depositions taken so far. Everything has been about the president’s effort to manipulate Ukraine’s president to start an investigation of Hunter Biden in order to get dirt on Joe Biden. The president has stonewalled Congress and engaged in activities to cover up his activities. I believe the attempt to get a foreign government help to win an American election is an impeachable offense.

American evangelical leaders will have to answer for their blind trust in a political leader. I didn’t think evangelical leaders could get much lower but they have. Even if they don’t think what Trump did is impeachable, they should not excuse it. It is as if the Constitution or framers’ intent don’t matter anymore. The only thing that matters is protecting Donald Trump.

First Baptist of Dallas pastor and Trump court evangelical Robert Jeffress doubled down on his warning of a “civil war like fracture” if Trump is removed from office via impeachment and conviction. Watch:

One of the CBN hosts gave him an opportunity to ratchet back his rhetoric but in Trump-like fashion, he called his analogy to the Civil War “a perfect idea.”

Read the comment and if they come away with that conclusion that I’m advocating or the president’s is a civil war, then they either can’t read or are too stupid to understand what we’re saying.

I have visited nations ravaged by civil war. @realDonaldTrump I have never imagined such a quote to be repeated by a President. This is beyond repugnant. https://t.co/a5Bae7bP7g

“Nancy Pelosi and the Democrats can’t put down the Impeachment match. They know they couldn’t beat him in 2016 against Hillary Clinton, and they’re increasingly aware of the fact that they won’t win against him in 2020, and Impeachment is the only tool they have to get….

….Election, and negate the votes of millions of Evangelicals in the process. They know the only Impeachable offense that President Trump has committed was beating Hillary Clinton in 2016. That’s the unpardonable sin for which the Democrats will never forgive him…..

….If the Democrats are successful in removing the President from office (which they will never be), it will cause a Civil War like fracture in this Nation from which our Country will never heal.” Pastor Robert Jeffress, @FoxNews

This is of course is an outrageous statement from Jeffress and a sign of panic and desperation from Trump. It is one more sign that Trump is unfit for office that he would incite such divisive rhetoric to try to keep himself in power.

For Jeffress to equate the impeachment of Trump to slavery as a reason for a “Civil War like fracture” is absurd. While we are in the minority, there are many evangelicals who want to see respect for the rule of law.

You can see the interview below: 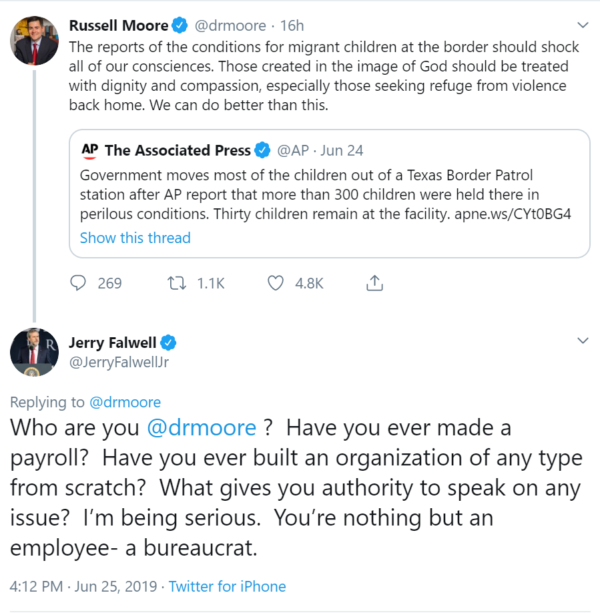 I can’t remember anything quite like this. Political loyalties have reduced self-styled Christian leaders to public wars. Witness Jerry Falwell, Jr.’s tweet today to Russell Moore.

The arrogance here is obvious. His reaction isn’t relevant to Moore’s comment. Moore didn’t even mention Trump but Moore’s concern about the treatment of migrant children implied enough disapproval to throw Falwell into a frenzied attack.

Moore said what many are feeling. I suspect there are numerous Trump voters who want to see children take care of. Moore did nothing wrong and a lot right.

I feel very sad tonight for Liberty staff and faculty, at least those who would like to speak out but can’t because their jobs are on the line.  Students, parents, and alums probably have the most leverage. Apparently the board is MIA or in complete accord with Mr. Falwell.

In any case, this is a new low and I don’t think there is a bottom. 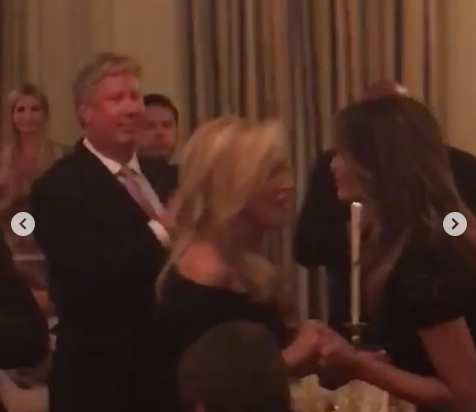 A reader sent some photos of the dinner which document some in attendance which I have not seen on other lists. The most comprehensive account thus far I have seen has been put together by professor Andy Rowell (see the link below)

Here’s a cross section of the room showing Jerry Falwell, Jr, Paula White, Franklin Graham, Jentezen Frankin and many others.

And here are Joni and Marcus Lamb and Gateway Church pastors Robert and Debbie Morris after flying on somebody’s private jet – the Lamb’s I believe. Court evangelicals truly suffer for Jesus.

Image: All images are fair use for the purpose of commentary and news reporting. Featured image – Melania Trump’s Instagram page.

Jack Graham, pastor of Prestonwood Baptist Church in Plano, TX came out in support of Donald Trump’s acceptance of Vladimir Putin’s assurance that Russia didn’t meddle in the 2016 U.S. election. Trump said this in response to a question about who Trump believed: our intelligence community or Putin.

There are three kinds of leaders….Caretakers. Undertakers. Risk takers. @realDonaldTrump @POTUS is Risktaker. Thank you Mr President for seeking peace and prosperity for America and the world https://t.co/YB13KVTEXT

In contrast, fellow Southern Baptist Russell Moore had this to say after the Helsinki press conference:

Morality is not relative.

Currently, Jack Graham is blocking followers who disagree with his tweet.

These tweets from the court evangelicals come from the White House talking points after today’s press conference.

WH sent out these talking points to surrogates. One line from the WH: “For over a year and half, the President has repeatedly said he believes the intelligence agencies when they said Russia interfered in American elections.” (Fact check: this is not believable after Helsinki) pic.twitter.com/qhMZSSacRa

Eric Metaxas defends Trump at Helsinki on his radio show right now: "There is nothing there…it was only a stumble." #ericmetaxas @EricMetaxasShow #courtevangelicals

Messiah College’s chair of the history department John Fea coined the phrase “court evangelical” to describe evangelical leaders who defend Donald Trump no matter what he does. Even Republican Senators have expressed confusion and negative reactions to the firing of James Comey, but not the court evangelicals. Watch:

"We need to concentrate on these real accomplishments instead of being distracted by the manufactured Comey crisis" ~ @robertjeffress #MAGA pic.twitter.com/yJ7XEyDUcj

Robert Jeffress is most certainly a court evangelical. Actually, the Comey controversy is real and for more reasons than Trump fired the head of the agency investigating him. Trump sent his surrogates out with a cover story and then changed it the next day. Somewhere in there is a lie and it doesn’t seem very evangelical to lie; except that for the court evangelicals, lying is just one of those political things that strongmen do.
According to Fea (I agree with him), court evangelicals “have put their faith in a political strongman who promises to alleviate their fears and protect them from the forces of secularization.” Fea’s list includes: