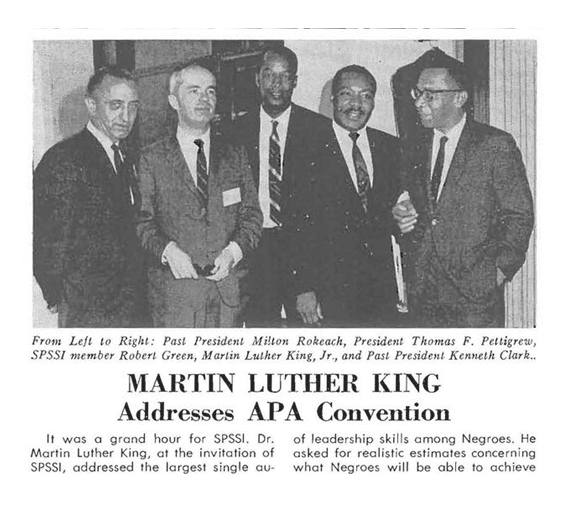 To remember Dr. King, I want to focus on his visit to the annual convention of the American Psychological Association in 1967. He was invited to speak to a division of APA – Society for the Psychological Study of Social Issues – by Kenneth Clark, the first Black president of the APA.

According to Thomas Pettigrew, president of SPSSI at the time, the majority of the APA board did not want King to speak, saying his invitation was “too political” and warning that psychologists would not be interested in what he had to say. However, over 5,000 people showed up forcing the organizers to secure the largest meeting room in the venue.

The title of his speech was, “The Role of the Behavioral Scientist in the Civil Rights Movement.” Below are some excerpts:

For social scientists, the opportunity to serve in a life‐giving purpose is a humanist challenge of rare distinction. Negroes too are eager for a rendezvous with truth and discovery. We are aware that social scientists, unlike some of their colleagues in the physical sciences, have been spared the grim feelings of guilt that attended the invention of nuclear weapons of destruction. Social scientists, in the main, are fortunate to be able to extirpate evil, not to invent it.

If the Negro needs social science for direction and for self‐understanding, the White society is in even more urgent need. White America needs to understand that it is poisoned to its soul by racism and the understanding needs to be carefully documented and consequently more difficult to reject. The present crisis arises because, although it is historically imperative that our society take the next step to equality, we find ourselves psychologically and socially imprisoned. All too many White Americans are horrified not with conditions of Negro life but with the product of these conditions—the Negro himself.

White America is seeking to keep the walls of segregation substantially intact while the evolution of society and the Negro’s desperation is causing them to crumble. The White majority, unprepared and unwilling to accept radical structural change, is resisting and producing chaos while complaining that if there were no chaos orderly change would come.

Negroes want the social scientist to address the White community and “tell it like it is.” White America has an appalling lack of knowledge concerning the reality of Negro life. One reason some advances were made in the South during the past decade was the discovery by northern Whites of the brutal facts of southern segregated life. It was the Negro who educated the nation by dramatizing the evils through nonviolent protest. The social scientist played little or no role in disclosing truth. The Negro action movement with raw courage did it virtually alone. When the majority of the country could not live with the extremes of brutality they witnessed, political remedies were enacted and customs were altered.

In 2018, the Journal of Social Issues revisited the speech with a special issue titled, “Tell It Like It Is”: Commemorating the 5oth Anniversary of Martin Luther King, Jr.’s Call to Behavioral Scientists.” 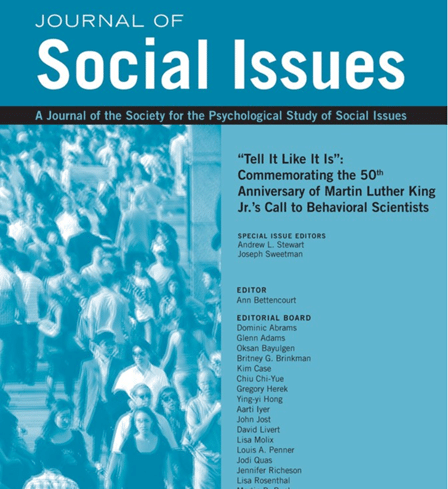 In general, SPSSI and social psychology have done reasonably well in researching much of what Dr. King called for a half century ago. But the hard truth is that we have failed to communicate our findings sufficiently to the public; thus, the full meaning of this large body of work has been effectively resisted by many white Americans…

National surveys provide a glimpse of the extent of our failure to communicate our findings to the American public. Recent Pew Research Center surveys show only 36% of White Americans think racial discrimination is involved in Blacks having “…a harder time getting ahead than Whites,” only 22% believe that Blacks “are treated less fairly in the workplace,” while 38% believe that the United States “…has made the changes needed to give [B]lacks equal rights with [W]hites.”

Generally, the development of critical race theory is dated after the assassination of King. However, one can see in his 1967 remarks the seeds of some of CRT’s points. King very specifically referred to “radical structural change” (systemic change) that was needed for Black Americans to achieve equity. King said white Americans were “poisoned” by racism and called on social scientists to document this. Now, social scientists are condemned by critics of CRT when they document and call out the poison and say exactly what King said in 1967. The bitter and discouraging irony is that many of these critics invoke decontextualized King quotes they like in order to criticize CRT and tell us King would also reject CRT. The APA address calls that project into question.

Sutton Turner today placed on his blog about 30 pages of material from the 2014 investigation into the formal charges against Mark Driscoll. Here is how he introduces the post:

On October 14, 2015 Mark Driscoll resigned from Mars Hill while under investigation from elders of Mars Hill Church based on formal charges and the governance by-laws that Driscoll helped to create.  The resignation was a surprise (as you will see below) to the leadership of Mars Hill.  Secretly, Mark Driscoll had coordinated with Mark Demoss and Religious New Service (Driscoll’s statement) to drive the narrative that would put Driscoll in a positive light so he could plant a church in Phoenix and sell books in the future.  The night before Driscoll resigned from Mars Hill he discussed his decision and received advice from both Robert Morris and Larry Osbourne.

At the time Driscoll resigned from Mars Hill in 2014, he threatened legal action towards anyone that shared details of the investigation including me and many of the elders who had investigated the formal charges against him.  To this day, many of us are still fearful of Driscoll. Even so, it is time to share these details.

Indeed there are many details. I cannot do justice to them today. At this point, I simply encourage you to pour yourself a beverage, maybe get a snack and find comfortable reading position.

I hope to have observations and comments in a future post but for now, those who have followed the saga can click through and take it in as you have time. 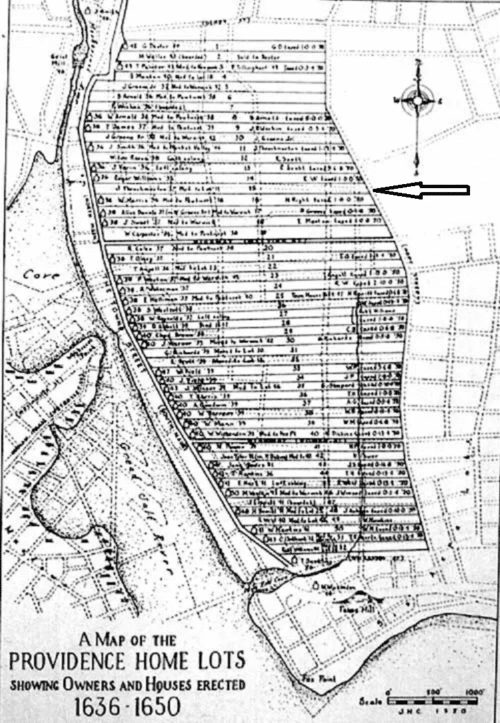 In 1640, thirty-nine male residents of Providence in what is now Rhode Island voted to ratify a system of government that allowed residents complete freedom of conscience in religious matters. The exact phrase they agreed to was “Wee agree, as formerly hath bin the liberties of the town, so still, to hould forth liberty of Conscience.”

This was the settlement of Roger Williams, the Baptist minister who had been expelled from Salem, MA and who championed religious freedom next door to John Winthrop’s Massachusett’s Bay colony where the wrong beliefs could get you in trouble with civil authorities. Williams founded Providence in 1636 and deeded shares of the land to twelve other men in 1638. One of those men was John Throckmorton. Throckmorton, a direct ancestor of mine, came from England with Williams and was also one of the 39 residents of the city who signed the first charter guaranteeing liberty of conscience.

Doing a little Ancestry.com research, I recently discovered this direct line back to John Throckmorton and I must admit it gave me an irrational measure of pleasure. I have taken pretty clear stands for separation of church and state and vigorously opposed Christian nationalism. My David Barton fact checking work has been motivated by passion for the belief in church-state separation. The current revival of Christian nationalism motivates me to counter it as I am able. Learning that a great, great, (five more greats) grandfather was involved at the beginning as a co-laborer and friend with Roger Williams is deeply satisfying.

Even after John Throckmorton became a Quaker, he stood up to Williams when Williams criticized the Quaker movement. It appears my ancestor was zealous to defend his independence of mind, even when his old friend came against him.

The story of Williams and Great(x7)-Grandpa Throckmorton reminds me that once upon a time Baptists were known for their fierce dedication to separation of church and state. Now, they are known for these shenanigans: 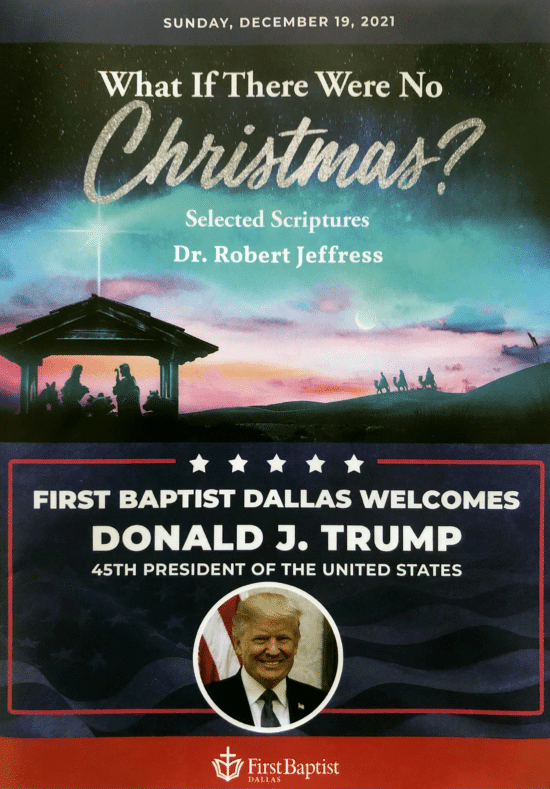 John Leland, the great Baptist who preached in MA and VA, said:

No national church can in its organization be the Gospel Church. National church takes in the whole nation and no more, whereas the Church takes in no nation but those who fear God and work in every nation. The notion of a Christian commonwealth should be exploded forever.

Should one sect be pampered above others? Should not government protect all kinds of people of every species of religion without showing the least partiality? Has not the world had enough proofs of the impolicy and cruelty of favoring a Jew more than a Pagan, Turk, or Christian, or a Christian more than either of them? Why should a man be proscribed or any wife disgraced for being a Jew a Turk a Pagan or a of any denomination when his talents and veracity as a civilian him to the confidence of the public?

Government should protect every man in thinking and speaking freely, and see that one does not abuse another. The liberty I contend for is more than toleration. The very idea of toleration is despicable; it supposes that some have a pre-eminence above the rest to grant indulgence, whereas all should be equally free, Jews, Turks, Pagans and Christians.

Many Christian nationalists today want the government to privilege Christianity. They don’t like what some people do in their private lives and want the government to legislate against it. Even though the state has no compelling interest in regulating this private conduct or conscience, Christian nationalists appeal to concepts like biblical law and biblical morality to suggest that the civil law should reflect their idea of what the Bible teaches.