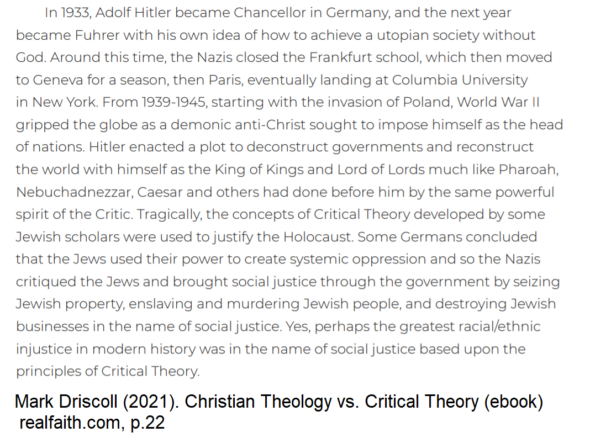 I don’t know what else to say about this “book.” Driscoll has taken lots of well deserved criticism on Twitter about it and I want to point out another great source: Wenatchie the Hatchet. Go check out WtH.

WtH is a hatchet for sure. In his new post: “Mark Driscoll’s Christian Theology vs Critical Theory could probably use at least one footnote giving credit to Stephen Eric Bronner’s primer on critical theory,” WtH shows how Driscoll is up to his old tricks of using other people’s material as if it is his own.

Beyond this, the book is just bad and nearly incoherent. I am going out on a limb to say Driscoll isn’t using ghostwriters anymore. At least he didn’t on this one. Here is WtH’s comment after 40 pages of it:

40 pages in and this is perhaps the most breath-takingly dubious and egregiously bad faith ranting I’ve ever seen Driscoll do, even compared to his William Wallace II rants from 21 years ago. I’ll eventually have to write about this dumpster fire of pamphleteering incompetence but I’ll want to go back and revisit how much Driscoll’s stated views seem indebted to systems of patronage.

He is being kind. It is that bad.

I intially thought I would critique it but I don’t know if it is worth it. Here is just one section:

Those Jews and their theories; brought the Holocaust on themselves.

There may be serious critiques of CRT; this has never been and will never be one.