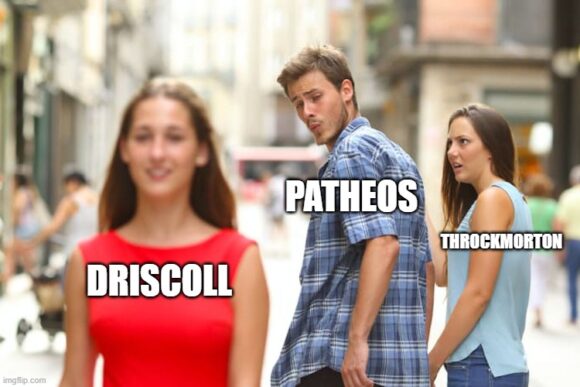 On May 21 2018, I received an email from COO of Patheos Jeremy McGee that I no longer met the “strategic objectives” of Patheos and therefore would be removed as a blogger from the site. Recently I learned from more than one former staff member of The Trinity Church  about a possible reason why I was evicted without a reason given.  If Mark Driscoll’s bragging is correct, Patheos management decided they would rather have Mark Driscoll’s traffic over mine.  According to the story that I have been told from two sources independently, Mark Driscoll told Patheos that he would not bring his substantial social media traffic to Patheos if I was allowed to stay on the site. In effect, he bragged, he got me kicked off the site.

At the time, the “favored advertiser theory” was one which made some sense. Obviously publishing is a business and if an advertiser/blogger promised to bring in lots of ad money and traffic (more than I was bringing in), then a management mainly in it for the profit would have to consider that. I could never get confirmation of the theory or prove who would be vindictive enough to actually pursue that gangster move.

As far as who might consider such a move, I thought of several candidates. Driscoll’s name did come up. After all, he told Tim Gaydos if Tim moved away from Mars Hill and planted his own church, Driscoll would tear it down brick by brick. You can hear that quote from Gaydos in the opener of every Rise and Fall of Mars Hill podcast episode. However, at the time, I could only speculate. Now, I have more than one reliable source with the same story of Driscoll bragging about getting me kicked off the site.

Not only was I told I had to stop blogging, my blog  was taken down so that all links throughout the web which pointed to my Patheos address no longer work. In effect, there was an effort to silence the writing.

Let it sink in a minute: Mark Driscoll met Patheos’ “strategic objectives” while I did not.

At the time, no reason was given beyond my blog no longer met their “strategic objectives.” I was given my blog content and allowed to host it on a friend’s server. That is the arrangement to this day. There are still numerous weblinks pointing to Patheos.com/wthrockmorton which are dead and lead to “410 Gone” on their site. I don’t get any reporting of the page views, but I would sure like to know how many views they have forfeited.

The irony is that Driscoll hasn’t posted on Patheos since July 2020. Forgive me for laughng about that.

I contacted Phil Fox Rose who was one of the Patheos editors at the time and who communicated to other Patheos bloggers about the decision. He is no longer with Patheos, however he wouldn’t tell me anything except he didn’t talk to Driscoll personally. That doesn’t mean much since he wasn’t a decision maker. He must have signed a non-disclosure agreement since he said he can’t talk about anything else at Patheos.

I also wrote the former COO of Patheos McGee to see if he could confirm or deny Driscoll’s bragg. I waited several days but haven’t heard anything.

So I am just putting this out there. I don’t know if it is true or not but this is the story Driscoll has told according to some of his former staff.

PS – If anybody else knows anything about any of this, my DMs are open so to speak.

UPDATE: Just talked to someone today who spoke to Grace Driscoll as The Trinity Church was opening during the summer of 2016. According to my source, Driscoll said her husband was trying to get Patheos to kick me off the platform back then. It took him a year but he made it on the site by late 2017. I was gone by May 2018.