A former staff member from The Trinity Church provided the following document to me: 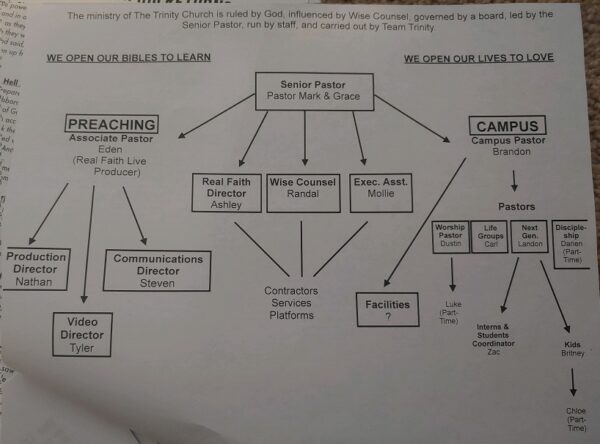 Notice the heading: “The ministry of The Trinity Church is ruled by God, influenced by Wise Counsel, governed by a board, led by the Senior Pastor, run by staff, and carried out by Team Trinity.”

However, looking at the flow chart, there is no board. Rather, note who is large and in charge – “Pastor Mark & Grace.”

Actually, on a sheet of instructions given to staff, that exact phrase “family business” is used. See #8 under Professional below: 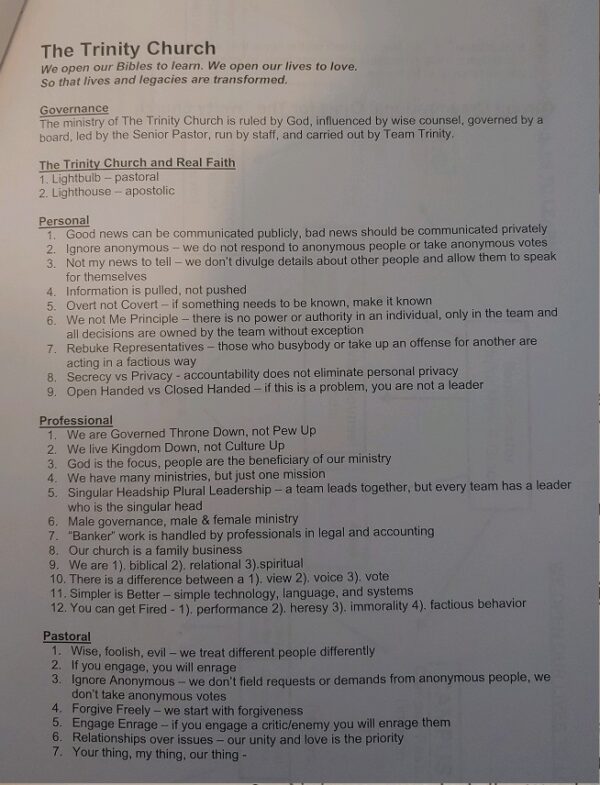 There are some catchy but meaningless phrases in this document. For instance: “We are Governed Throne Down, not Pew Up.” Who is on what throne? In practice, this is just a way of the single leader telling everybody else what to do and claiming God’s permission to do it.

Staff and volunteers also have to sign a non-disclosure agreement. I will take that up in a separate post.

There are awful, harrowing stories coming out of this church. People are being kept from seeing family members because of how they feel about Mark Driscoll. Having chronicled stories from Mars Hill, I can say it feels like deja vu all over again listening to the hurting people contacting me now.

For any The Trinity Church attenders who are brave enough to read this far: Ask yourself why there are no financial statements. Do you know how your offerings are being spent? Why are there no elders or deliberative meetings over church direction? Why do people simply disappear from attendance without comment? Why are some people shunned?  Why aren’t  forgiveness and reconciliation stories what Mark Driscoll’s churches are known for?

If you are really brave, invest some time listening to these former Mars Hill Church co-workers of the man who now occupies your Trinity throne.