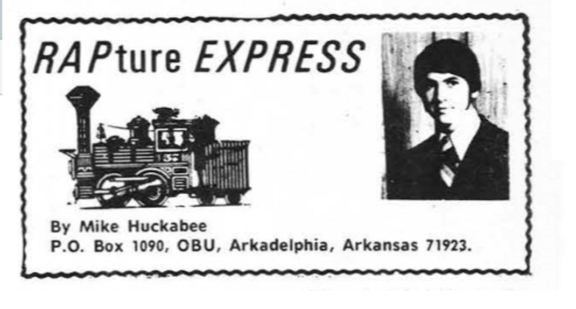 Over the past four years, former Arkansas governor Mike Huckabee has become a reliable defender of Donald Trump and Trumpism. He recently aroused the ire of Beth Moore and hundreds of other Twitter users with a  trademark bad dad joke tweet implying that Chinese people get special privilege from corporate America. The tone of the tweet appears to minimize the recent wave of anti-Asian attacks.

Mike, I’ve shared a meal with you at your beautiful table. I’ve heard you profess Christ as Lord. This is entirely antithetical to the gospel.

He’s back at it again today with this tweet.

Breaking wind from CNN! Coke will announce name change today to “Woke-A-Cola” which has been approved by the Chinese Communist Party & by the leftist loons who the company bows to more than their actual customers. #CancelCulture

Actually, totured reasoning isn’t anything new to Huckabee. The same guy who once half-joked that he wished he could force people at gun point to listen to David Barton’s lectures, once defended the police for shooting two black youth for stealing beer.

While I cannot say how this came to me, I here reproduce a column Huckabee wrote in 1975 which justifies the police shooting of two black young men who were caught stealing beer. One of the young men, 17, was killed. Huckabee actually says the shooting was the fault of the boys. Because they stole beer, they deserved to be shot, he reasoned. In the real world, it is hard to imagine white boys being shot dead for stealing beer.

Huckabee’s insensitivity to race as an issue in this shooting sounds sadly contemporary. White boys stealing some beer — or abusing an animal as Huckabee’s son was once accused of doing — might be slapped on the hands or given probation, but deadly force was used with these black young men.

Huckabee’s defense of the officers was that they couldn’t tell if the young men were black or white. This seems to be a ridiculous assertion. According to Huckabee, the boys were ordered to stop but ran. The officers surely saw them when they ordered them to stop. They were close enough to shoot them.

Stealing beer shouldn’t trigger a death sentence. Instead of calling for an investigation, Huckabee used his influence as a white minister to defend deadly force for a minor crime, quite possibly with racial bias. I realize this is long time ago, but apparently Huckabee hasn’t changed much.