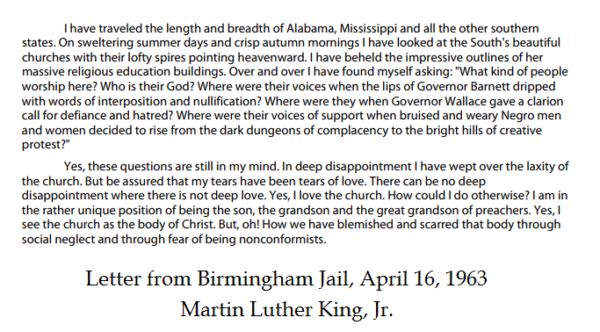 Dated April 16, 1963, Martin Luther King wrote a letter from jail in Birmingham during the non-violent campaign there. In the letter, he defended the strategy of non-violence used in the Birmingham campaign.
One of the striking elements of the letter is King’s disappointment with the white clergy in the South. Here is a key passage:

Currently, white and black evangelicals are divided in obvious ways as we observe another MLK, Jr Day. For instance, African American Baptist churches are leaving the Southern Baptist Convention as white leaders there take aim at Critical Race Theory while yawning at Christian nationalism. White evangelicals as a group find themselves in much the same place as when King, Jr. wrote in 1963. I long for a change. I long for an end to concern for ideological purity and a striving for relational purity. 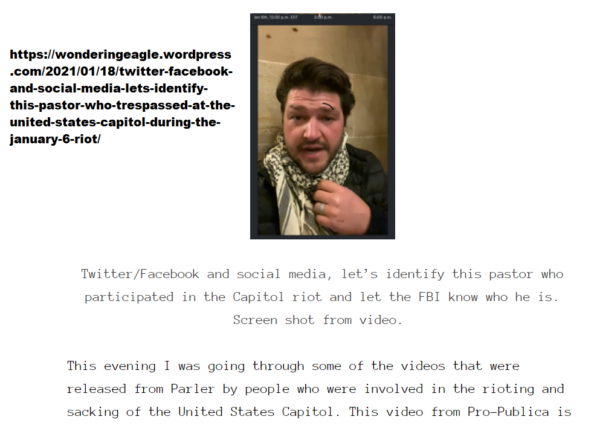 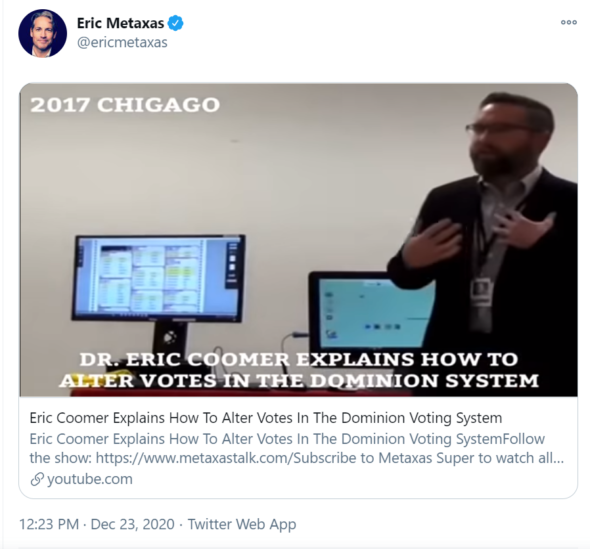 American Thinker and contributors Andrea Widburg, R.D. Wedge, Brian Tomlinson, and Peggy Ryan have published pieces on www.AmericanThinker.com that falsely accuse US Dominion Inc., Dominion Voting Systems, Inc., and Dominion Voting Systems Corporation (collectively “Dominion”) of conspiring to steal the November 2020 election from Donald Trump. These pieces rely on discredited sources who have peddled debunked theories about Dominion’s supposed ties to Venezuela, fraud on Dominion’s machines that resulted in massive vote switching or weighted votes, and other claims falsely stating that there is credible evidence that Dominion acted fraudulently.

These statements are completely false and have no basis in fact. Industry experts and public officials alike have confirmed that Dominion conducted itself appropriately and that there is simply no evidence to support these claims.

It was wrong for us to publish these false statements. We apologize to Dominion for all of the harm this caused them and their employees. We also apologize to our readers for abandoning 9 journalistic principles and misrepresenting Dominion’s track record and its limited role in tabulating votes for the November 2020 election. We regret this grave error.

This is an important statement. Of course, they were threatened with a defamation suit, but the owners of the site recognized that they couldn’t prove their claims.

Dominion has filed suit against several other news outlets and persons, including Eric Metaxas.

Rick Saccone is a former state representative and adjunct professor at St. Vincent College in PA. He once ran and lost an election against a current member of the House of Representatives from PA, Conor Lamb. He also once sought the GOP nomination to run for Senate in PA and had Christian nationalist icon David Barton’s endorsement. More recently, Saccone showed up on January 6th as a part of the crowd that stormed the Capitol. In fact, he filmed himself describing it.

He then issued a statment minimizing his earlier words. In this KDKA report, part of that statement is provided.

I don’t buy his explanation since he said they were going to run the evil people and “Rinos” out of their offices. Shortly after this video was posted on Facebook, he resigned his adjunct position at St. Vincent and took the video off of Facebook.

I am posting this because I want to draw a line between Saccone’s Christian nationalist beliefs and his appearance in a mob willing to “storm the Capitol.” I realize this is one person and not all persons who hold Christian nationalist beliefs are willing to go as far as Saccone. However, Saccone is a case of an individual who articulates a pious Christianity on one hand but on the other justifies aggressive action when he perceives that his ideology isn’t dominant.

Here is a Saccone on Christian television, Cornerstone TV:

Saccone’s evidence that the Lord is working in America is Trump’s leadership and a good economy. He says as long as “the Lord is leading us,” America will be fine.

But what happens when Trump (or the current messianic political figure) isn’t in power?

Apparently, for at least some Christian nationalists, it is time to take to the streets and storm the Capitol. If your Christianity doesn’t include nationalism, you simply accept whatever happens in each election and continue to pursue the Kingdom of God. However, if your Christianity requires America to be run by Christian rule, then when your preferred candidate loses, your faith is threatened. These are incompatible visions of what our mission here is about. One leads to peace and preoccupation with redemption and service to all. The other leads to political preoccupation, division, discord and sometimes violence. I have a pretty clear idea about which one I think is right.

Some Trump supporters are floating the theory that antifa sympathizers infiltrated their ranks and are responsible for the invasion of the U.S. Capitol on Wednesday. Not only has an initial claim by the Washington Times been retracted, a major problem with this theory is that Trump supporters who were leading the charge — they call themselves “patriots” — deny it. They take credit for the action and threaten that there will be more such actions in the future.

Below are clips of Trump supporters debunking the narrative that antifa did the dirty work on Wednesday. I have also provided a link to a full video of the insurrection as filmed by one of the instigators.

DeAnna Lorraine and her colleague Brandon say in clear language that their Trump supporting group and thousands of their closest friends perpetrated the breach of the Capitol. “Antifa was nowhere to be found…” said Brandon.

The full video of DeAnna Lorraine is here at this tweet and I link to the full 88 minute video (to get a sense of what happened, I recommend watching all of it) here.

These Trump supporters appear to be planning more action like this. A complete review of just these two sources includes threats of additional aggression.

Today, Trump is out with a tweet undoing much of what he said yesterday about a peaceful transition of power.

Trump’s “patriots” who broke into the Capitol Wednesday will certainly take no criticism or disapproval from this.

In any case, the narrative of antifa (see other evidence here) being involved or responsible cannot stand up to scrutiny.

Lots of finger pointing at antifa today by Christians who say Trump supporters didn’t storm the Capitol yesterday during the count of Electoral votes in Washington, DC.  Instead, they say antifa infiltrators did it.

First, no specific people have been offered as examples. One would think all of those Trump supporters would know a stranger in their midst. Second, Trump supporters all over the place are taking credit for the mayhem (see here, here, and here).

The third point in response is the subject of this post. Jericho Marchers, mostly Christian Trump supporters who believe the election was stolen posted video of themselves occupying the outside of the Capitol and are bragging about it. Look:

The marchers are on the Capitol steps and the bleachers set up for the Biden/Harris inauguration ceremony. According to news reports yesterday, these spaces were off limits to the public.  The whole area was barricaded but the marchers broke through.  Here they are singing the National Anthem after illegally breaking through the barricade and occupying the Capitol steps and plaza.

I watched this yesterday as it happened and I couldn’t believe the marchers just walked through the barricades. The marchers ignored instructions and warnings from Capitol Police and occupied the area.

Another way of looking at the people outside of the Capitol is that they provide cover for the mob inside the Capitol to loot and terrorize. They were not supposed to be there and it took a significant law enforcement build up to clear them from the area.

Trump cultist Brenden Dilley dismisses Trump’s call for peace as MAGA activists storm the Capitol: “With all due respect, what the fuck did you think was going to happen?” https://t.co/Ht080CDcfL pic.twitter.com/y0wUPKQMGq

I have never been so glad to be Never Trump as today.

Trump protesters stormed the Capitol today disrupting the Electoral College count. I am writing this as the protest is going on so it is unclear how many injuries there will be. The protesters actually invaded the House chamber with no intervention from the National Guard. Apparently, our legislative branch is vulnerable to a mob.

"You're on the wrong side."

Protesters chanted at police as hundreds pushed against barricades outside the Capitol in Washington, D.C. pic.twitter.com/dWxv0duuDe

In my opinion, Donald Trump incited the riot with his rhetoric leading up to the protest and by his speech this morning. His tweets of we won’t stand for the election to be stolen and similar themes have incited his followers to believe his lies and debunked theories. Now, his followers have crossed a bright red line and engaged in violent action.

Trump supporters who have gone along with the conspiracy theories about voter fraud and voting machine switching tactics need to own their rhetoric. Below, I have copied some reaction from those who say what I am thinking.

I'm gonna guess we've never before had to call out the National Guard to quell a protest that was called for by the PRESIDENT OF THE UNITED STATES.

White evangelical leaders, this is on you. https://t.co/yMNATSRtZU

This is the president less than 24 hours ago. "They won't stand" for the steal he says.

He has fueled this fire, day by day, moment by moment.

You just can’t abuse those things without consequence.

Such a sad day for our country.

For that matter, flip open to any page of Scripture, and the same statement applies.

Tell me again that the only concern about Trump is with his “manners.”

You monumental hypocrites and cowards. Look what you’ve done.