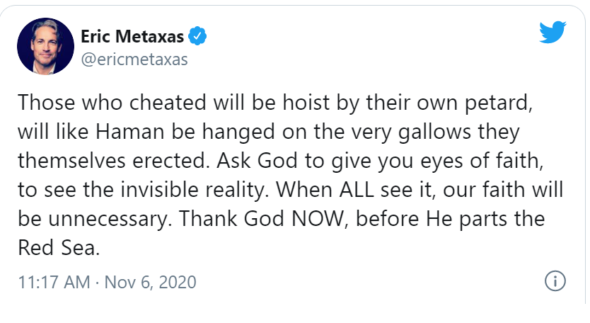 Last night Donald Trump said he believed the election was being stolen from him and today tweeted this:

Last night I was leading, often solidly, in many key States, in almost all instances Democrat run & controlled. Then, one by one, they started to magically disappear as surprise ballot dumps were counted. VERY STRANGE, and the “pollsters” got it completely & historically wrong!

As in every other election, mail in and absentee ballots are being counted today and will be added to the totals. There are more of them this year due to record numbers of ballots being cast in this manner. Ballots haven’t appeared in a “surprise ballot dump.” Either Trump is ignorant or deliberately attempting to destabilize the nation.

Will evangelicals who support Trump buy into this?

Does anyone else find it strange that it’s only Democrat strongholds like Philadelphia, Milwaukee, and Detroit that are having massive delays counting their votes?

Franklin Graham is lending credibility to this delusion:

I ask that you continue to pray for our nation and this election. Many fear that some are trying to steal the election, so join me in praying that the will of God would be done. Pray that the enemies of God would be quieted and that all their plans would be put to nothing.

Paula White battles the “demonic confederacies” that are attempting to steal the election from Trump. pic.twitter.com/Bt3BJOkJIV

John Fea has a post on this same topic, check it out.

Greg Thornbury has this reaction:

These are the nut jobs who now pass muster as *evangelicals* & line up lockstep with Al Mohler & get published by @CTmagazine.

It’s why evangelicalism will never be taken seriously ever again. https://t.co/YqJ1WgLJJG

And of course Etic “Punch and Run” Metaxas punches and runs:

Those who cheated will be hoist by their own petard, will like Haman be hanged on the very gallows they themselves erected. Ask God to give you eyes of faith, to see the invisible reality. When ALL see it, our faith will be unnecessary. Thank God NOW, before He parts the Red Sea.

Metaxas in particular is melting down.

FACT: If there had been no cheating the counting would not have suddenly stopped in key states when it looked like Trump was ahead. That was just the FIRST red flag. Rest assured we as a nation will get to the bottom of this. But if you need to know NOW: Trump will be #vindicated

There are so many witnesses to voter fraud it's now clear the Dems planned this. But who did that planning? When Trump is finally reelected– & he will be –he must see these traitors punished to the fullest extent of the law. Anything less is itself treasonous. God help America.

If Biden had won FAIRLY, I'd accept him as president. But what I know makes me strongly suspect he did NOT. So we must all wait & let the process play itself out until we ALL know who actually won. I'm willing to wait, but Biden's side seems unwilling. I wonder why. Watch & pray.

Evangelical leaders who have made their bed with Trump will not go quietly into the night. No matter what the damage is to the faith, they will continue to enable Trump’s delusions. It is shameful but predictable given where they have been for the last four years.

In my view, preachers don’t have any specific expertise to add to what is going on with election counting. It is taking place as it always has. What they should do is simply reinforce the beauty of our system that we count every vote. What they shouldn’t do is rebroadcast and reinforce baseless conspiracies about stolen elections.

If you see other evangelicals promoting this delusion, put a link in the comments.