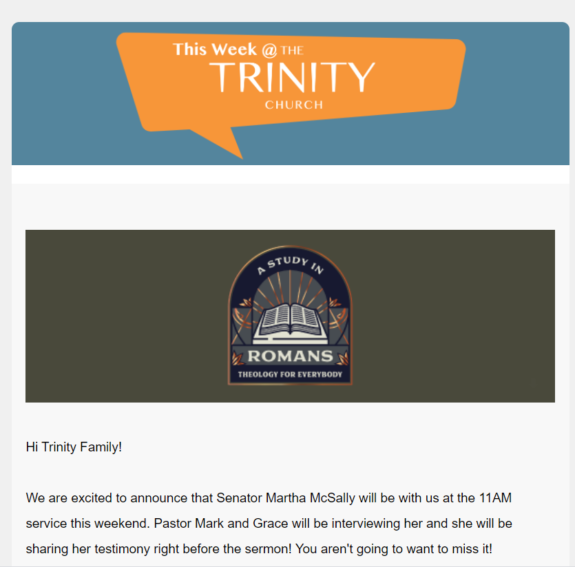 This Sunday, Mark Driscoll will host Sen. Martha McSally during the 11am service at The Trinity Church where she will give a testimony.

I hope they are on their best behavior. Both McSally and Driscoll are known for their use of foul language.  Driscoll famously shamed one of his Mars Hill elders into swearing during an elder meeting, even though the elder didn’t want to do it. He also was once known as the “cussing pastor.”

McSally is also known for her colorful language and brusque manner. When Senators were discussing the repeal of the Affordable Care Act, she stood and signaled her wish to repeal it with an urgent profanity.

Martha McSally stood up in GOP conference meeting and said let's get this "fucking thing" done.

McSally acknowledges she uses “salty” language and, for that reason, refused to condemn Trump’s reference to “shithole” nations. More troubling than the language is Driscoll’s move into advocacy for the Trump agenda.

McSally will be a big draw among Trump supporting Republicans along with the water slides and other attractions at the property. A source close to the church told me that The Trinity Church is not using mitigation measures such as social distancing and masks. So add Driscoll’s church to the growing list of COVID spreading, Trump supporting ministries.