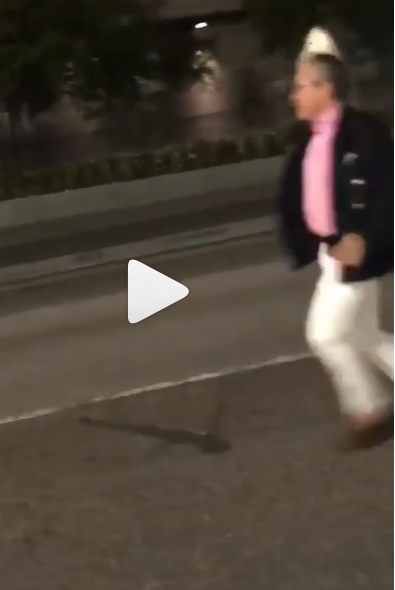 Someone named Eric who dressed and looks like Eric Metaxas punched an anti-Trump bike rider last night after Trump’s acceptance speech at the Republican National Convention and ran away from the guy he hit before police came.* You could say the speech inspired Metaxas to action. Watch:

dc night 2 PLEASE SHARE!!! @ericmetaxas i got punched by a member of the RNC and get detained by SECRET SERVICE for absolutely nothing

The punch is at the beginning and a woman shouts, “Eric!” Then you see a man who looks like Metaxas running backward out of sight. You hear another shout of Eric while this is happening.

After the protestor was assaulted, he ran after the backpedaling Eric and was intercepted by the Secret Service. The Secret Service detained the bike rider. Here is that video:

I watched some of the protestor’s Instagram videos describing what happened after being detained. He said that the person who took the video of the assault came up to the Secret Service and told them he had video that showed what happened. The Secret Service watched it and on that basis, let the bike rider go. Apparently, they were satisfied that the man in the white pants did the hitting.

Twitter is all about it today. Seems like a good time to replay this assessment of Metaxas by Greg Thornbury.

Metaxas has been one of the biggest puzzles of the Trump era. A biographer of Dietrich Bonhoeffer, he has consistently defended Trump and even said Christians must vote for him. He wrote two children’s books which appear to denigrate immigrants and has called nationalist Katie Hopkins his “hero.”

*Although Metaxas hasn’t spoken about the incident yet (8/29), his friends are defending the actions as if he did it. In a “he had it coming” defense, Rod Dreher rationalizes the move by accepting the account of an anonymous “witness” who said the biker was threatening. We have the video and it just doesn’t look that way. His wife’s “Eric!?” doesn’t sound that way either.

Look I know we can’t get into someone’s head in a situation, but I would like to hear from Metaxas on this. Thus far, he is just blocking everybody on Twitter who is asking him about it. If he felt threatened, what was his plan after he suckerpunched the guy? Was he hoping his punch would knock him out? I hear what his friends are saying and I understand how sometimes people act out of character. However, I also see Metaxas’ defense and adulation of people who make their names on violent rhetoric (Trump, Milo, Katie Hopkins and Ann Coulter come to mind). I also see his cartoonish defense of Trump’s violent and odious policies at the border. His public persona is not inconsistent with what we saw on camera.