Although the judge declined to halt indoor worship altogether, he ordered the church to “comply with the mandates of the Health Orders to wear face coverings and practice physical distancing.” This practice will be a departure from the last two sundays when very few people in the congregation wore masks and the congregation did not sit apart. The county health department will also be allowed to be on site to monitor compliance.

According to press release from the church, MacArthur said, “I am very  grateful the court has allowed us to meet inside and we are happy for a few weeks to comply and respect what the judge has asked of us because he is allowing is to meet.” The full hearing on the matter is slated for September 4.

The church is framing this as full vindication.  In fact, according to Judge Chalfant’s order, the restraining order was denied in part and granted in part. The accurate picture is that the church did not follow safe practices before, but now they have to as a condition of meeting indoors. According to Chalfant’s order, Grace is prohibited from meeting indoors unless the church complies with masking and physical distancing. I asked the public relations firm representing the church if this social distancing requirement would limit the number in attendance but the representative did not have the answer to that question. 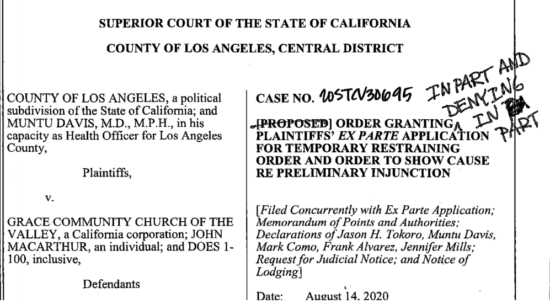