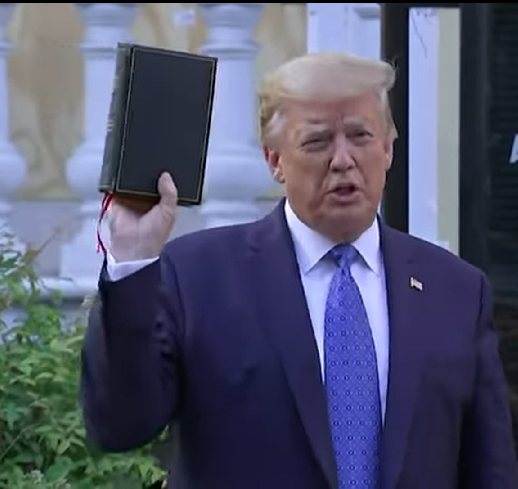 This month marks 15 years of blogging and this is my 5,000th post. I always thought it might be fun and light but this one is not. It is a lament.

Yesterday evening in Washington, D.C., Donald Trump told a Rose Garden audience that he had deployed the National Guard to disperse crowds and stop violence. It wasn’t clear at that moment but his order was being carried out as he spoke. Not far away in Lafayette square near St. John’s Episcopal Church, peaceful protestors populated the area. Around 6:30pm, the Guard began actively pushing the assembly from the area with shields, tear gas, rubber bullets, and flash grenades. Once the area was cleared, Trump walked to the same area with an entorage of officials for a photo op holding a Bible in front of St. John’s church. In short, Donald Trump ordered force on peaceful protestors so he could get a picture using religious images.

This is a frightening new low. There wasn’t an effort to hide it. Ample eyewitness accounts and video exist. This was a power play. Apparently, Trump and his advisors believe his base — including white evangelicals — will fall in line.

Below, I have posted video and various accounts and reflections on the event.

Around 6:15 or 6:30, the police started really pushing protestors off of H Street (the street between the church and Lafayette Park, and ultimately, the White House. They started using tear gas and folks were running at us for eyewashes or water or wet paper towels. At this point, Julia, one of our seminarians for next year (who is a trauma nurse) and I looked at each other in disbelief. I was coughing, her eyes were watering, and we were trying to help people as the police – in full riot gear – drove people toward us. Julia and her classmates left and I stayed with the BLM folks trying to help people. Suddenly, around 6:30, there was more tear gas, more concussion grenades, and I think I saw someone hit by a rubber bullet – he was grasping his stomach and there was a mark on his shirt. The police in their riot gear were literally walking onto the St. John’s, Lafayette Square patio with these metal shields, pushing people off the patio and driving them back. People were running at us as the police advanced toward us from the other side of the patio. We had to try to pick up what we could. The BLM medic folks were obviously well practiced. They picked up boxes and ran. I was so stunned I only got a few water bottles and my spray bottle of eyewash. We were literally DRIVEN OFF of the St. John’s, Lafayette Square patio with tear gas and concussion grenades and police in full riot gear. We were pushed back 20 feet, and then eventually – with SO MANY concussion grenades – back to K street. By the time I got back to my car, around 7, I was getting texts from people saying that Trump was outside of St. John’s, Lafayette Square. I literally COULD NOT believe it. WE WERE DRIVEN OFF OF THE PATIO AT ST. JOHN’S – a place of peace and respite and medical care throughout the day – SO THAT MAN COULD HAVE A PHOTO OPPORTUNITY IN FRONT OF THE CHURCH!!! PEOPLE WERE HURT SO THAT HE COULD POSE IN FRONT OF THE CHURCH WITH A BIBLE! HE WOULD HAVE HAD TO STEP OVER THE MEDICAL SUPPLIES WE LEFT BEHIND BECAUSE WE WERE BEING TEAR GASSED!!!!

“An ally of all peaceful protestors” said Donald Trump in his speech; an ally unless those protestors get in the way of his photo op.

The caption to the next video reads: “It began with Attorney General Bill Barr standing with his hands casually in his pockets, not wearing a tie, surveying the scene at Lafayette Park across from the White House, where several thousand protesters had gathered for more demonstrations after the police killing of George Floyd.”

Here is another eyewitness account which was posted as a comment on court evangelical Johnnie Moore’s fawning description of Trump.

I was there. Trump is a coward. This is what he did to clear the street. Sent a militarized police after peaceful Americans.

Note the older woman with her dog at the 30 second mark. pic.twitter.com/CRNynKq3mf

The bishop of the diocese of the St John Church, Miriam Budde, reacted with condemnation of Trump’s action.

Tonight President just used a Bible and a church of my diocese as a backdrop for a message antithetical to the teachings of Jesus and everything that our church stands for. To do so, he sanctioned the use of tear gas by police officers in riot gear to clear the church yard. 1/1

We are followers of Jesus. In no way do we support the President’s incendiary response to a wounded, grieving nation. We stand with those seeking justice for the death of George Floyd through the sacred act of peaceful protest.

Senator Ben Sasse (R-NE) found his voice and made this statement:

Ed Stetzer had some mild rebukes for the president.

To use the Bible in a photo op, after clearing peaceful protestors from Lafayette Park with, The Hill reported, “tear gas and smoke bombs hissing” so he could walk to a church, was simultaneously unhelpful to the current situation and at odds with the message of that Bible.

Johnnie, my goodness, how did you become so out of touch? Firing teargas into a crowd of peaceful protesters so you can use the Holy Word of God as a political prop is the act that hinders our national healing, not those trying to bring awareness of injustice.

You guys remember how SBC leaders rightly and quickly spoke out against Trump tear gassing people so he could take a photo op with a Bible? Yeah, me neither.

So this is a lament. I recall similar worries, although in a much younger mind and body, in the 1960s. I had a youthful optimism then and while I am still hopeful that our institutions will hold, I am more realistic now. We must all rehearse our rights and remind each other about them. I hope Trump’s base will see through this and turn lament into change.

UPDATE: Trump’s court evangelicals are out in force to spin Trump’s photo op.

NEW: Johnnie Moore, Informal Evangelical Advisor to @realDonaldTrump Admin with blunt words for Episcopal & Catholic Archbishops: “…they were part of the problem today, not the solution.” Says they were, “spreading misinformation” like China & Iran. Read Full statement pic.twitter.com/eZKRbf5Dj6

The Park Police initially said no one used tear gas. This report has the evidence to contradict that denial.

UPDATE (6/8/20) – Here the most complete analysis I have seen of the event from the Washington Post.