Let me just get to the point. Here Eric Metaxas’ most recent contribution to his Christian witness. 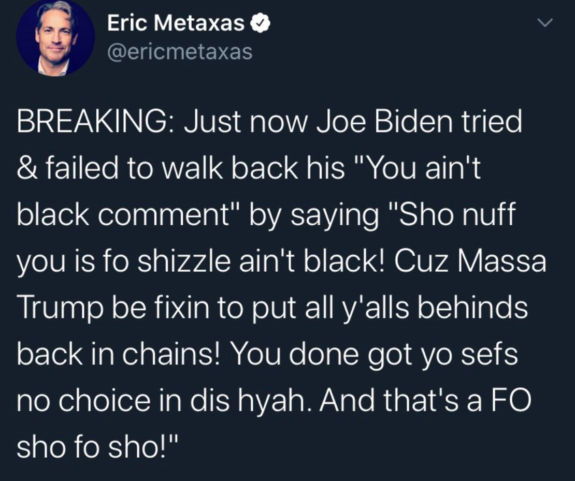 Metaxas was reacting to Joe Biden’s comments about conservative African-Americans not being black. Biden’s point was not well stated and he apologized for it today.

The fact that Biden was out of line with his comment is no reason for Metaxas to engage in what has been called by Christian professor Karen Prior the “Twitter equivalent of Blackface.”

Eric, this isn’t funny. This is the Twitter equivalent of Blackface.

Anyone following Metaxas over the past three years shouldn’t be too surprised by this. Some prior guests on his show includes Katie Hopkins, (see also this link), Milo Yiannopoulos, and his good friend and opponent of the “hoards” from the third world, Ann Coulter.  And of course, there is Metaxas’ undying support for Donald Trump.

Those folks want to keep America (and Britain in the case of Hopkins) white and European.  I don’t know what’s in Metaxas’ heart, but I could never give those three a platform, let alone call them friends and heroes.

Metaxas is currently getting dragged on social media for this tweet, and rightly so. However, if tomorrow everything goes back to normal, what will it matter?

Ed Stetzer has weighed in:

Good opportunity here to delete this tweet and put up a short apology.

That anyone would post this type of racist garbage is shocking. That it was done by someone who is still considered a prominent evangelical is inexcusable.

This is also a prime example of where an un-Christian allegiance to political tribalism leads. What an embarrassment. https://t.co/Xg4xwy6UiZ

After being ratioed all night long, Metaxas doubled down:

So may we call Biden’s policies “racist”? And those that oppose them “anti-racist”? Or shall we focus on the shiny objects for another fifty years and ignore the crushing reality? https://t.co/ObXeQsGIpW

In the most recent Quinnipiac University poll, Joe Biden was favored by 81% of black voters over Donald Trump, who was favored by only 3%. Although it was a dumb and insensitive way of saying it, Biden was not untethered to the facts.

If anyone is failing to deal with reality, it is Metaxas and his supporters. They fail to deal with the fact that there are good reasons for the disparity in the black vote. Principally, what Republicans do is criticize black voters for being captivated by “shiny objects” as if black voters don’t have reasons to favor the Democratic party.

Conservatives will make the most of Biden’s gaffe but exploitation can’t cover the fact that members of GOP fight against expanding voting access. Members of which party support Confederate heroes and symbols and find “very good people” among those who want to see a statue of Robert E. Lee remain in a honored place? Not the Democratic party.

According to a recent poll, black Americans feel that racial division has grown and that Trump is responsible for that that. They strongly disapprove of his performance and hold him responsible for an increase in racism on his watch. There are reasons for these results which Republican leaders simply don’t want to confront.