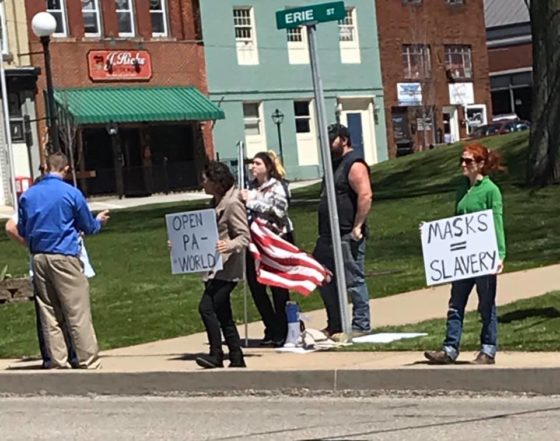 Today in nearby Mercer PA, a small protest against PA’s stay at home restrictions was held and a friend took this photo:

Starting Sunday night, Governor Tom Wolf requested “as many people as possible wear a nonmedical or homemade mask when leaving their homes.” Apparently, this woman has no idea what slavery is or was because there is nothing equivalent about slavery and a requirement to wear a mask to prevent the spread of disease. It is impossible to take protests like this seriously when this kind of absurd and racially insensitive rhetoric is featured.

This same woman is not permitted to walk down the middle of the street or drive on the wrong side of the road. These rules are for her good and the safety of others. Today I wore my mask when I went out and I plan to protect myself and others for the duration.

It is beyond belief that Donald Trump has done nothing to discourage these protests. He has actually promoted them with his tweets to “liberate” three states with Democratic governors. I can’t think of a comparable situation in my lifetime where an American president says one thing to the public but provokes his followers to ignore what he says. He could put a stop to this by calling out the protesters. They are carrying Trump signs and flags. Some are carrying Confederate flags. He has every reason to discourage the protests for public health reasons but he winks and nods and they continue.

In Harrisburg, PA today, an antivax message was prominent as a part of the protest.

The scene in Harrisburg, Pa.