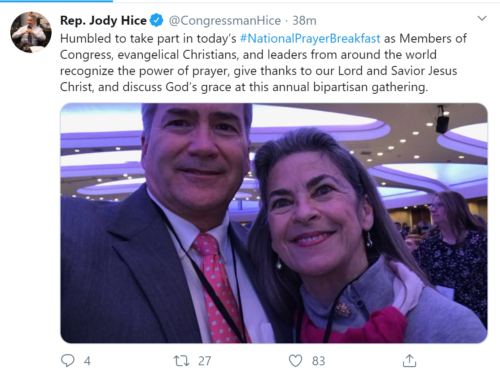 At least that what Rep. Jody Hice (R-GA) says about it.

Humbled to take part in today’s #NationalPrayerBreakfast as Members of Congress, evangelical Christians, and leaders from around the world recognize the power of prayer, give thanks to our Lord and Savior Jesus Christ, and discuss God’s grace at this annual bipartisan gathering. pic.twitter.com/hcig4CVByS

Rep. Hice remembered to say the gathering was bipartisan but he gave away the fact that the NPB isn’t an ecumenical meeting. It is not a multi-faith event. It is all about portraying a tribute to Christianity by Congress and the Executive branch.

Today, in a move that should shock no one, Trump used the event to tout his acquittal.

Ahead of his remarks to the National Prayer Breakfast in Washington, DC, Trump waves around a newspaper with the headline, “ACQUITTED.” pic.twitter.com/MWVO9B0mgY

In essence, Trump and all of the politicians there get to use religion for political purposes. Trump has a very specific purpose but even the Democratic pols conflate political power with Christianity by their presence and support. I can’t see how either Christianity or government is served well.

This is a good time to point you to the Netflix documentary series on the organization who puts on the NPB – The Fellowship Foundation. While I do believe the organization does and has done good philanthropy, I think the NPB should be halted or modified to make it transparent that Congress doesn’t host it.

UPDATE: Part of Trump’s speech turned out to be a campaign rally of sorts.

I'm not a theologian but I can't help but feel that bragging about employment numbers during a speech to a prayer breakfast misses the point pic.twitter.com/c4aoHnaWIf

Trump will use any opportunity to exalt himself and the Fellowship Foundation smiles and looks on. Everybody pretends to be unified in Jesus.