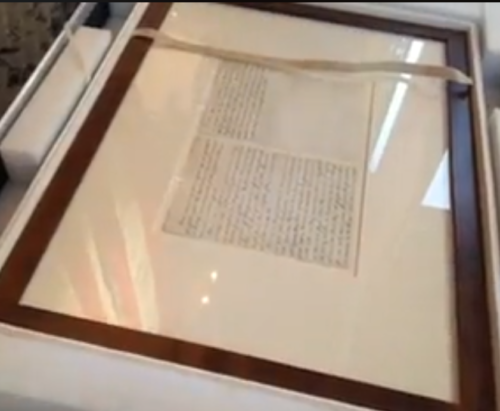 In June 2018, Glenn Beck borrowed the Gettysburg Address from the Abraham Lincoln Presidential Library and Museum. One of only five handwritten copies of the address from the time period, the document is valued at $20-million. In hindsight, the transaction, for which Beck paid $50,000, has become a political scandal in Illinois and triggered the firing of the executive director of the Lincoln museum. The Chief Operating Officer of the Lincoln museum was allowed to resign and eventually ended up working for Beck’s charity Mercury One. The IG report also contains an unflattering assessment of David Barton as a historian.

The incident, which Beck celebrated live in 2018, was investigated by the Illinois Office of Executive Inspector General due to a tip from an anonymous consumer. The report found that allegations of wrongdoing were sound and based in fact. The report states that the museum should never have let Mercury One have the Gettysburg Address given the slipshod arrangements and David Barton’s reputation as a historian.

On June 8, Beck’s charity Mercury One and the Executive Director of the Lincoln museum Alan Lowe initiated negotiations to bring the Gettysburg Address to Beck’s Right and Responsibilities exhibit in Dallas. After only 8 days, the document was shipped to Texas. Beck displayed the document to just over 2300 people who attended the exhibit.

The complaint alleged that Lowe mismanaged the loan process. According to the IG report, that allegation was accurate. From the IG report:

Earlier this year, Lowe was fired from his position by Governor J.B. Pritzker, although he did not say why. Two other players in the drama continue to have a connection to Mercury One.

The first one I will mention is Michael Little. The IG report documents over 50 contacts with Mercury One he had prior to being permitted to resign over this snafu. As a part of leaving state employment, employees are required to divulge contacts with new employers. Little said he didn’t have any with Mercury One other than his interview. However, the IG found over 50 emails between Little and staff at Mercury One. Little was subsequently hired as the Chief Operating Officer at Mercury One. So the current COO at Mercury One misled the state of Illinois just prior to taking his job.

That brings me to David Barton. For fun, I will quote what the IG report has to say about Barton.

According to an online Texas arts calendar, visitors to Mercury One’s Rights & Responsibilities exhibition in June 2018 could expect to see items Mercury One was sharing from its own collection, including an exploding rat from World War II, whose designer inspired the James Bond character Q; as well as a facsimile engraving of a draft Declaration of Independence; Mary Todd Lincoln’s dress; and Lincoln’s collar. The calendar indicated that Mercury One charged $20 for adult general admission, $750 for private VIP tours with Mr. Beck, $350 for private tours with David Barton, and $250 for private tours with other Mercury One staff. According to the calendar, during the private tours Mr. Beck, Mr. Barton, and the other staff were to provide their “own unique perspective on our rights and responsibilities.”

The Lincoln museum staff didn’t know anything about Barton until after the fact. However, as the passage below shows, they did a little late homework.

Ms. Smith and Dr. Wheeler told investigators that at the time of the loan, they did not know what else was going to be displayed at Mercury One’s exhibition. Ms. Smith said that information is relevant to the consideration of whether it is appropriate for the ALPLM’s artifacts to be displayed or interpreted alongside the other items in the exhibit. Dr. Wheeler said that it is a “betrayal of public trust” to not have known what the Mercury One exhibit was about, what other pieces would be displayed alongside the ALPLM and Foundation artifacts, or how the exhibit would be presented.

The museum registrar (Smith) and Illinois state historian (Wheeler) were bothered after the fact that Executive Director Lowe had let the Gettysburg Address be displayed along with artifacts of questionable reputation. But then they got to Barton’s reputation and they were really troubled.

In addition, Ms. Smith and Dr. Wheeler said they later learned concerning information about David Barton’s reputation. In 2012, Christian publisher Thomas Nelson recalled all copies and ceased publication of Mr. Barton’s book, The Jefferson Lies: Exposing the Myths You’ve Always Believed About Thomas Jefferson, after it learned that “there were some historical details included in the book that were not adequately supported.” The book was voted the “least credible history book in print” in a 2012 reader poll by the History News Network, a George Washington University online publication “created to give historians the opportunity to reach a national audience on issues of public concern.” Dr. Wheeler said that based on what he later learned about Mr. Barton, he believed that “under no circumstances” should the ALPLM be associated with him. Ms. Smith said that if she had known what she later learned about Mr. Barton’s reputation, the 2018 loan would have been an “instant no.”

No to the Emancipation Proclamation

Earlier this year, Beck wanted to borrow the Emancipation Proclamation with Barton listed as Curator of the exhibit. The museum, partly for that reason, turned Mercury One down.

Ms. Smith told investigators that after she received the letter of request and facility report, she convened the ALPLM collections staff, and the staff unanimously recommended to deny the loan request. She stated that she sent Mr. Lowe and Ms. O’Leary a detailed list of reasons why staff recommended not doing the loan. The listed reasons included that some of the information provided in the Standard Facility Report was incomplete or required clarification; concerns about Mr. Barton being listed as a Curator who would be interpreting ALPLM artifacts, given his reputation as a historian; and concerns about Mr. Little being listed as the Registrar or Collections Manager, given his lack of qualifications for handling artifacts. Ms. Smith said that Mr. Little’s history of mishandling artifacts at the ALPLM was also of concern.

On Beck’s Mercury One website, the nonprofit still lists the Abraham Lincoln Presidential Library and Museum as a partner. However, this does not appear to be accurate. Not only was Lowe fired, current Mercury One COO Michael Little is not allowed to ever work for the state of Illinois. Given the results of this report, it is hard to see the two organizations ever working together again. It is deceptive for Barton and Mercury One to tout a relationship that not only isn’t true but is the subject of a scathing report by the Illinois Inspector General.

Illinois Times columnist Bruce Rushton has been on this story from the beginning and deserves credit for being on top of it.