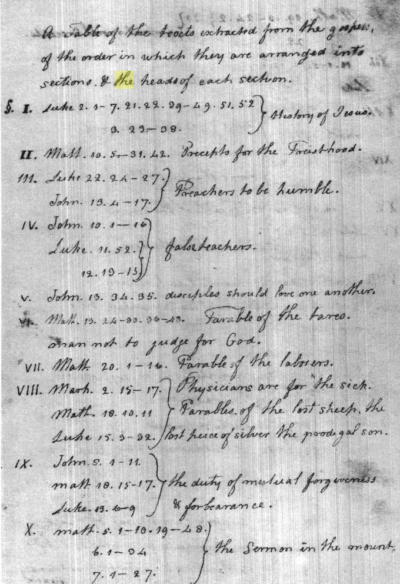 David Barton spent an hour or so with Ben Shapiro on The Daily Wire recently and one of the topics was The Jefferson Bible. As Barton likes to say dramatically, Jefferson edited the gospels twice in his life. One of those versions we have today which is often called the Jefferson Bible. However, as Jefferson made clear in his correspondence, the two efforts were part of lifelong process to find what Jefferson considered to be the true teachings of Jesus. He made two efforts, one hastily done in the White House, and one more carefully later in life.

In any case, at 32:28 below Barton starts his narrative about The Jefferson Bible. Watch:

Barton told Shapiro nearly the same false story he told Eric Metaxas when he appeared on Metaxas’ show in 2016. I did a debunking of that story then with links to additional debunkings. You should go check it out.

Did Jefferson’s 1804 Version Include Just The Red Letters?

Let’s just take one claim. Barton told Shapiro that in his 1804 version of The Jefferson Bible, Jefferson cut out all of the words of Jesus — “the red letters” and included them in the compilation. This is false. First, we can’t be 100% sure what was in the final bound version because no copy has survived to this day. Only the version done sometime after 1820 has survived. When Barton asks people if they have ever read either version, he knows they can’t have read the 1804 effort because a copy doesn’t exist.

The reason we have some confidence about what was in it is because Jefferson’s outline for what he wanted to include has survived as have the Bibles he used to cut out those verses from the Gospels. Thus, Jefferson’s extracted Gospel can be reconstructed. The most rigorous reconstruction has been done by Dickinson Adams and published in Jefferson’s Extracts from the Gospels. Barton is aware of this work and knows about Jefferson’s tables. He knows that Jefferson did not intend to include the red letters of John 3:16, John 14:6 or the resurrection of Christ. There is no feeding of the 5,000. Jesus doesn’t walk on water in Jefferson’s version. His red lettered exhortation to “Be of good cheer; it is I; be not afraid” is not to be found in Jefferson’s extraction. Jefferson’s 1804 version ends with John 19:30:

When Jesus therefore had received the vinegar, he said, ‘It is finished.’ and he bowed his head and gave up the ghost.

There is no resurrection or Great Commission in either of Jefferson’s extractions.

I covered Barton’s claims about The Jefferson Bible in my book with Michael Coulter, Getting Jefferson Right: Fact Checking Claims About Our Third President and included the tables Jefferson constructed to guide his extractions. I have included links to the three images here. If a verse is listed, Jefferson intended to extract it for use in his version of the Gospels.

As anyone can see, these passages leave out almost all of the miracles of Jesus and many of His words. Barton is simply wrong to say that Jefferson took all of “the red letters” and compiled them in a volume. In several letters to friends, Jefferson described his project and said he could discern the actual teachings of Jesus from those added by his followers. He said picking the actual words and teaching was as simple as “plucking diamonds from a dunghill.” This he said to John Adams in 1813 about that 1804 version:

I have performed this operation for my own use, by cutting verse by verse out of the printed book, and arranging, the matter which is evidently his, and which is as easily distinguishable as diamonds in a dunghill. The result is an 8 vo. of 46. pages of pure and unsophisticated doctrines, such as were professed and acted on by the unlettered apostles, the Apostolic fathers, and the Christians of the 1st. century.

I have covered the other claims elsewhere but I hope this is enough to show that Barton is making things up in direct contrast to the evidence. He has been doing this since at least 2011.

In addition, the claim that Jefferson was inspired by a sermon to give this compilation to Indians is false as well. The sermon says nothing about giving just the words of Jesus to native people. Even one of Barton’s own collaborators, Mark Belilies, admitted that to me. Nonetheless, Barton continues telling the same stories.