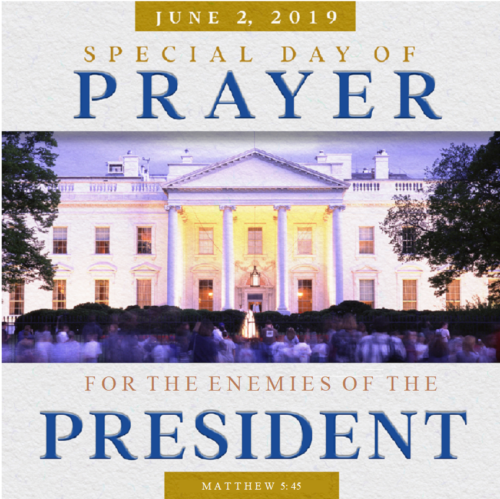 Franklin Graham is holding a “special day of prayer” for Donald Trump on June 2nd. Graham says the president needs prayer because he has been attacked more than any other president in history. Trump needs prayer, Graham proclaimed, because the entire nation will suffer if his enemies prevail.

I think Graham is going about this in the wrong way. If he really believes Trump is being attacked and persecuted, he should pray also for those he sees as the enemy.

But I tell you, love your enemies and pray for those who persecute you.

However, since he and his group of court evangelicals have chosen sides and decided their course of action, I will cover the part of the prayer territory Graham is leaving uncovered and encourage others to do the same.

We can pray for the House of Representatives investigators. They are having a devil of a time getting people at the White House to abide by the rule of law. They issue subpoenas and legitimate requests for information only to have them ignored. We should pray for them to have better results and that the rule of law will be followed.

We can also pray that judges quickly rule according to law and not political loyalties. So far, the results look promising.

Let’s add the press to our prayer list. They have a hard job but are maligned on a daily basis simply for reporting what Mr. Trump says and does. Some are bad actors but they are on the left and right. We can pray extra for them.

Apparently, Trump thinks poor Central American refugees are his enemies. I will gladly set aside more time to pray for them. Surely, they need it. They also qualify as being members of the “least of these” Jesus told us to pray for. They should get a double portion.

Who is with me?

If you have other suggestions for our prayer list, please leave them in the comments.

Whatever you pray about, I urge you not to turn Sunday worship into a political pep rally for or against Trump. Whatever you do, do it on your own.