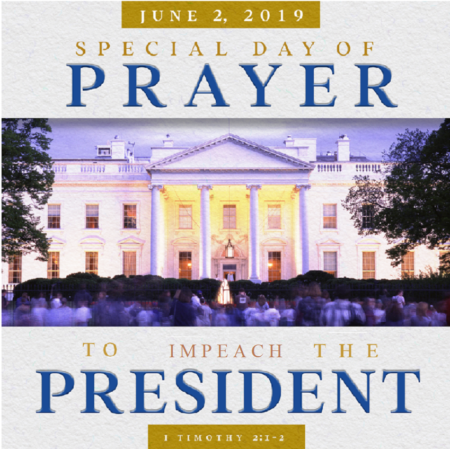 In a helpful gesture, well over 200 court evangelicals have gone on record as supporters of Donald Trump in a solicitation to fellow evangelicals to pray for the president on June 2. Many of the usual suspects are on the list, but I must admit I am having a hard time getting over former DC Talk member Michael Tait being there.

Nothing in the call to prayer calls Trump to repentance for his many lies, for his support for ruthless dictators around the world, for his obstructions of reasonable Congressional oversight, or for the authorization of cruel treatment of asylum seekers at the border. The Scripture used by Franklin Graham as foundation for the event calls on Christians to pray for kings and those in authority. In our system, that includes the president, but it also includes Congress. The House Democrats are trying to exercise oversight but are being thwarted by Trump and his supporters. I pray for the investigators to continue having victories in the courts. Republicans once believed in the rule of law. Now they believe in protecting Trump. Just what is it that Graham and his court evangelicals want us to pray about when it comes to the subpoenas?

I do and plan to continue praying that the right thing will happen and the House investigators will prosper. From my own perspective, I believe that should lead to an impeachment inquiry. I don’t know for certain how that would end up because one can’t know the findings until the hearings are held and the investigations are completed. However, I think the Mueller report as well as other actions by Trump have more than warranted such hearings.  Many Christians are praying for the truth to come out via the investigations; what are Graham’s Christians praying for?

It isn’t clear to me what the court evangelicals are praying for. From an outsiders perspective, it looks like they are praying to preserve a person and not the office. It appears they are asking God to keep Trump in office no matter what he does. If that’s not true, then I think they need to work on their messaging. If it is true, then they have the wrong message.