On several occasions, Rev. MacArthur has claimed he visited the crime scene where Martin Luther King Jr. was shot dead on April 4, 1968. This issue has taken on new urgency with the publication of an investigative report in NOQ Reports written by Paige Rogers.

Over several decades, MacArthur has described hearing about the murder of Martin Luther King, Jr while being in Jackson, MS. In essence, he has said he was in the Jackson NAACP office of Charles Evers, brother of civil rights martyr Medgar Evers when a man entered the office and said King had been shot. At that point, several of the men including John Perkins and MacArthur traveled to Memphis to see the crime scene. MacArthur claims the scene wasn’t monitored and the men were able to inspect the King’s blood stains at the Lorraine Motel and examine the bathroom from where James Earl Ray fired the fatal shots.

In Rogers article, Charles Evers is quoted saying he was in his car when he received word of the shooting. In the first edition of a book where he gives an account of the event, he says he heard of the shooting on the radio. In subsequent accounts, he said he got a call on his car phone. In any case, he was not in his office in Jackson.

However, I have found evidence that supports MacArthur’s contention that he was with Perkins. In John Perkins’ 1993 book, Beyond Charity, Perkins wrote the following: 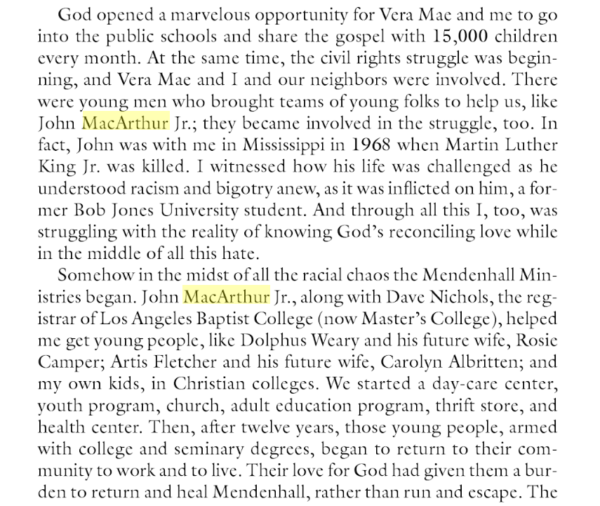 While this passage doesn’t place MacArthur and Perkins in Evers’ office (and a later account from Perkins doesn’t mention Evers), it does place them together. This information was not in Rogers’ article.

A more important issue to me is whether or not Perkins and MacArthur went to Memphis that night (or at any time) and examined the crime scene. MacArthur has repeatedly said he did in the wake of the shooting even saying the security was lax which allowed them to go to the place where King was killed.

This seems unlikely since a curfew had been imposed and reportedly security was tight at the Lorraine Motel according to available police records. The Rogers’ article did an admirable job of bringing this information together.

I have emailed and messaged John Perkins via social media to ask him about his recollections of this night. He has yet to answer. In 2018, he told an interviewer that he was informed via the radio and community members after preaching. There was no mention of MacArthur, Evers or the NAACP office. I have been unable to find any mention in any of his books of a trip to the Lorraine Motel that night.

According to John Perkins, John MacArthur was in MS with him when MLK, Jr. was killed. I also believe that Evers was in his car when he heard about the death of King. I can understand how memory can reconstruct certain elements of an event. However, the trip to Memphis is another matter.

I would really like to hear from John Perkins about what happened after he heard the news. The logistics of that night and distance between Jackson and Memphis make it seem improbable that MacArthur’s detailed accounts are accurate as described. I can’t judge the situation beyond that and am certainly not willing to say anything more with certainty without hearing from Perkins.

(Information above without links is derived from Rogers’ article. Consult that article for more on the police reports surrounding the aftermath of the King shooting.)