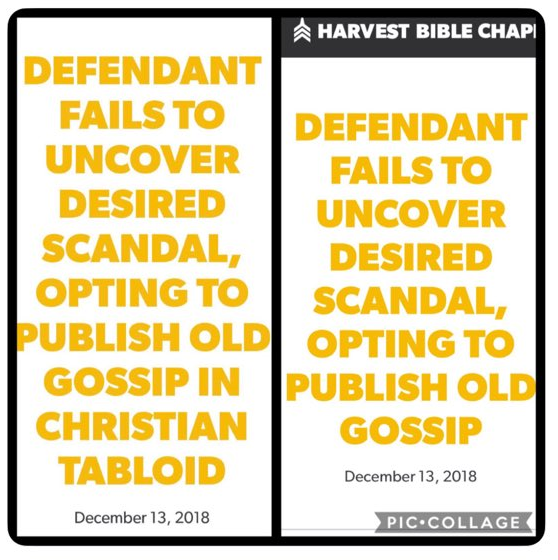 On Thursday, WORLD published the long anticipated article on Harvest Bible Chapel. Written by Julie Roys, the article gives a summary of various concerns expressed by former members and observers of the Illinois megachurch. Roys is also the defendant in a defamation suit brought by HBC.

In an earlier post about the lawsuit I wrote, “The legal action appeared to be designed to frighten the bloggers and intimidate the magazine into pulling the plug on the article.”

In an email, HBC Associate Communications Director Sherri Smith objected to my characterization of the suit saying, “We have said in multiple communications why we filed this lawsuit. To editorialize, disguising it as reporting, is disingenuous at best.”

Why Sue the Wives?

I also asked Ms. Smith why HBC included the wives of the bloggers as defendants in the suit. She replied, “Regarding defendants wives, we are not at liberty to discuss anything related to the lawsuit. The position of our Elders is published on our website and when they consider a matter worthy of response, they post a response there.”

I searched for a mention of the wives of the defendants and couldn’t find anything on the church website. An elder update in October refers to “three defendants.”

In a specially called meeting on September 29, the Elders of Harvest Bible Chapel carefully considered our biblical options related to three individuals, who have long been outside of our church. Our goal was to end their prolonged and divisive effort to undermine the Elder governance of our church and to discredit our primary leaders. We have chosen to accomplish that by filing a civil suit in Cook County.

With the wives of the two bloggers involved, there are five defendants, not just three.

Response to the WORLD Article

HBC has responded to the WORLD article. Actually, they responded once and then quickly altered at least the headline on their website (see below).

The combative tone continues in the response:

It is a sad day when once-credible Christian publications consider the opinions of a few disgruntled former members, already rehashed ad nauseam, of greater weight than the carefully expressed viewpoint of a plurality of local church Elders.

Harvest Bible Chapel has owned its mistakes and endured to become a happier and healthier church, whose members recently pledged — financially, in their walk/work for Christ, and in their promise to share Christ with others — at unprecedented levels. The anticipated attack that comes with God’s kingdom moving forward has come, sadly, not from those in the world but from other professing Christians.

I am looking into several other aspects of HBC’s ministry and hope to write more next week based on communications I have had with the church.