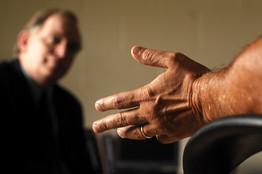 In a recent CBS News report on reparative therapy (sexual orientation change efforts), Focus on the Family’s Jeff Johnston was quoted in support of the practice and a link to FOTF’s website was a part of the story. I have a long history with Focus on this issue. There are some misleading statements on this page which I outline below.

Focus on the Family does not and has never offered sexual-orientation change therapy, also referred to as “reparative therapy.” We have licensed counselors on staff who take one-time phone calls and refer to other therapists, upon request. We also support an individual’s right to counseling for unwanted homosexuality — and the rights of counselors to offer such help.

Although technically true, Focus did recommend reparative therapy via their Love Won Out traveling ex-gay workshops from the late 1990s into the late 2000s. Reparative therapy popularizer Joe Nicolosi was the featured speaker on the origins and treatment of homosexuality. Exodus, Focus on the Family and NARTH (National Association for Research and Therapy of Homosexuality) were the trinity of sexual orientation change efforts in the United States. Even if Focus didn’t have counselors on site who offered counseling, they promoted reparative therapy to the world in a very aggressive manner.

“Sexual Orientation Change Efforts” (SOCE) is a broad term that deals with any kind of help from a licensed mental-health professional for those with unwanted homosexuality. This is counseling, or talk therapy, to assist someone with unwanted homosexuality —whether it’s behavior, attractions or identity — to live according to their faith and values.

Focus tries to soften the meaning of the word “change.” SOCE is a broad term but it doesn’t refer to “any kind of help from a licensed mental-health professional for those with unwanted homosexuality.” Change means change. SOCE is about trying to help people change their orientation. Opponents of SOCE oppose the efforts of counselors to change orientation.

Focus confuses the issue by saying SOCE includes counseling efforts to help clients “live according to their faith and values.” That would only be SOCE if living according to one’s faith meant changing sexual orientation. However, sexual identity therapy (which is what Mark Yarhouse and I developed) helps people without focusing on orientation change as a goal. Our perspective is that clients can be assisted within their religious framework without any SOCE.

Sexual identity therapy is not SOCE. SIT is a kind of help for people who are conflicted about their sexual orientation but it isn’t SOCE. SIT does help people seek harmony within themselves without using SOCE. Focus’ description of SOCE is too broad and misleading. Focus appears to want to make this issue about religious freedom when in fact, it is about what is helpful with clients.

Focus then speculates about what isn’t allowed by a ban on SOCE.

If this therapy is banned, think about the impact this would have on minors:

A teen boy who is hooked on gay pornography — and wants to stop — could not get help from a licensed professional counselor.

A young girl who was sexually abused, and was questioning her identity, could only get help to identify as lesbian, bisexual or transgender.

A boy who wants to develop his sense of masculinity and identity could not get help to affirm his masculine identity from a state-licensed counselor.

A girl who’s involved in a same-sex relationship, but whose faith says that’s not best for her, could not get help to stop the relationship from a licensed counselor.

As worded above, SOCE is not required to address any of these situations. Laws prohibiting SOCE for minors allow for identity exploration and the treatment of sexual abuse. The laws do not forbid clients from acting in line with their religious beliefs as long as the counselor does not implement techniques designed to change a client’s sexual orientation. For instance, if a same-sex attracted teen is in a same-sex relationship but believes it is wrong, she can seek help to take steps to end it and cope with the results.