On September 24, I started a series of articles on the American Association of Christian Counselors Foundation. Specifically, I am examining what the foundation does. In that first article, I wrote that the AACCF exists to serve the American Association of Christian Counselors, the private business owned by Trump advisor and Family Talk Radio director Tim Clinton.  In this article, I compare the stated mission of the AACCF with the expenditures reported on the organization’s IRS 990 filings.

What the AACCF is supposed to do depends on the audience. To consumers, the AACCF funds programs which aren’t a priority “in a for-profit business model” which is what AACC is.

What are those programs? Currently, the AACC website lists the Christian Care (referral) Network, the New Century Marriage Initiative, the International Association of Christian Counselors, and student scholarships to AACC conferences. 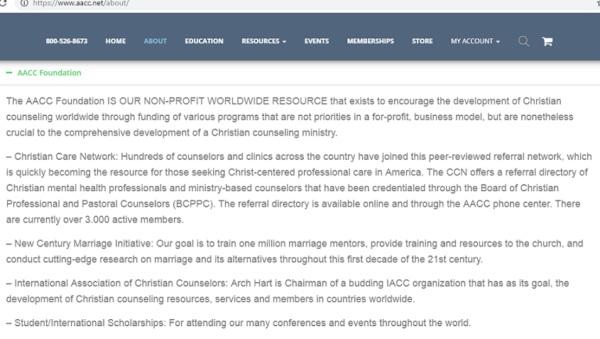 Elsewhere in the past, AACC included disaster relief in the list. A current website lists a suicide prevention program called Suicide Pair Initiative. I can’t find any evidence of any activity by AACC to put this into motion but AACC has been promoting it since late 2016.

In contrast, on the 990 forms submitted to the IRS, AACCF declares their mission:

In case that’s hard to read, here it is again:

To assist in providing a biblical, Christian ministry of the gospel, hope, encouragement and strength to as many people as possible by providing books, tapes and supplies to counselors who can benefit from this service.

To the public, the AACCF mission sounds charitable and benevolent. To the IRS, the main activity is more accurately disclosed as a vehicle for the sale of books, tapes and supplies. About 96% of AACCF’s revenues comes from sales of books and supplies; the rest comes from donors. About 98.5% of all revenues ends up going back to the AACC (Tim Clinton’s business) via various fees (employee rental, office rent, etc.). According to the 990 forms from 2002 through 2016, only 1.4% ($122,387) has gone to the charitable causes described on the AACC website.

So what charitable purposes did AACCF help? There are so few I can list them by year.

In some years, the AACCF declared nothing on their 990 which matched up with any of the purposes listed on the AACC website (e.g., scholarships, marriage initiative, suicide prevention, international counseling associations, etc.). For instance, in 2016 the AACCF took in over $222,000 in contributions but didn’t show grants to any of the priorities listed on the AACC website. The funds went back to AACC via fees for services provided by AACC to AACCF. Of course, there is no bidding process for AACCF to get a good deal on these services. People donate money so that AACCF can spend those funds on services provided by AACC. At least, that’s the story told by the 990 in 2016.

There was one other expenditure listed as a grant in 2014. However, it was given to a for profit business belonging to Tim Clinton. I detailed this arrangement in my last post. Clinton’s men’s weekend adventure Wildfire Men’s Weekend lost money in 2014. Two donors gave $220,000 to the AACCF apparently with knowledge that the nonprofit would give those funds to Tim Clinton’s for profit business. The AACCF also took $10,000 of unrestricted funds to give to Clinton’s for profit business. Imagine the surprise of donors who thought they were helping international counselors get to a conference, or maybe pitching in for disaster relief. Instead, some of those funds went to the “for-profit business model” that the Foundation isn’t supposed to fund.

It is hard to take AACCF’s public mission statement seriously when the charitable giving goes to support the for-profit business. An examination of the 990 forms shows clearly where the priorities are.

Anyone can review AACCF’s 990s at ProPublica.