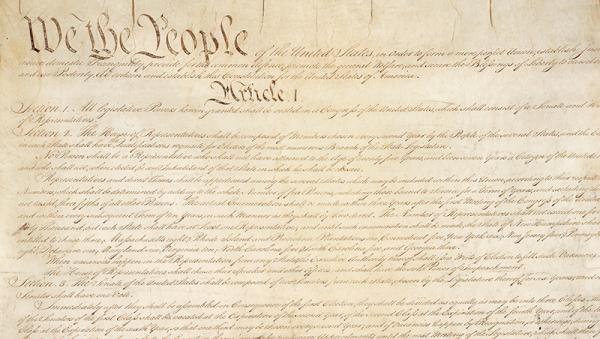 During the summer of 2017, I did a daily series summarizing James Madison’s notes to the 1787 Constitutional Convention. Today, I am reprinting the final entry in that series in recognition of Constitution Day. On this day, after a change (tinkering to the end) in the document and a little dissent, the document was signed.

I read Madison’s notes looking for the Christian influence proposed by many Christian nationalists. While many of delegates were affiliated with Christian churches, I found very little interest on the part of the delegates to create a Christian republic.

Mr. KING and Mr. CARROLL seconded and supported the ideas of Mr. GORHAM.

When the President rose, for the purpose of putting the question, he said, that although his situation had hitherto restrained him from offering his sentiments on questions depending in the House, and, it might be thought, ought now to impose silence on him, yet he could not forbear expressing his wish that the alteration proposed might take place. It was much to be desired that the objections to the plan recommended might be made as few as possible. The smallness of the proportion of Representatives had been considered, by many members of the Convention an insufficient security for the rights and interests of the people. He acknowledged that it had always appeared to himself among the exceptionable parts of the plan; and late as the present moment was for admitting amendments, he thought this of so much consequence, that it would give him much satisfaction to see it adopted.1
No opposition was made to the proposition of Mr. GORHAM, and it was agreed to unanimously.