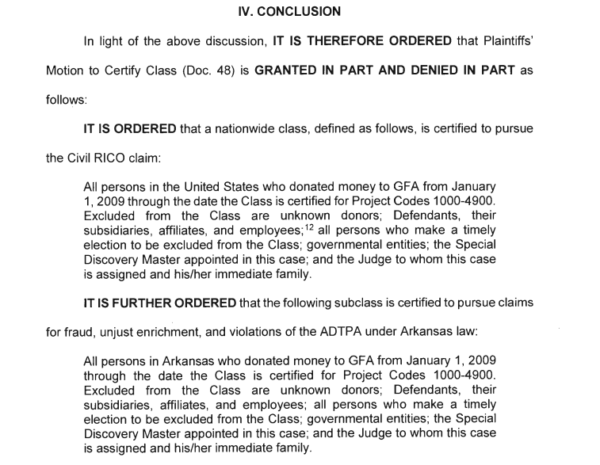 The judge gave GFA until October 10, 2018 to come up with a suitable plan for alerting donors about this action. This will give donors a chance to opt out of the class if they wish. I will report that process when announced here as well. For now, GFA donors can anticipate being contacted.

This is a significant milestone in this case and opens this action up to all donors (with the exceptions as noted in the judge’s order) since 2009. An exception not noted here are former employees of GFA who signed an arbitration agreement with GFA while employees. In another case involving former employees, a federal appeals court ruled that former employees pressing a RICO claim must submit to arbitration if that was a part of their contract. However, for all other donors, the class certification is a major development.

In a related development, Judge Brooks appointed a Special Master to oversee the discovery process. This had been anticipated since Judge Brooks had sanctioned GFA over their lack of response to discovery requests from the plaintiffs.

The Special Master is attorney David R. Cohen of Cleveland, OH. He will have freedom to inspect GFA’s documents wherever he believes is necessary to determine compliance.

I expected that GFA would have made an effort to settle before a Special Master was appointed. I suspect this is causing significant stress in Wills Point, TX and somewhere in Kerala, India.