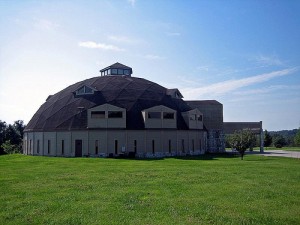 UPDATE (9/14/18) – Oren Paris III, former president of Ecclesia College, was sentenced on September 12 to three years in prison for his part in the bribery and kickback scheme described below. He will also have to pay $621,000 in restitution.  Paris originally claimed innocence but then bargained with prosecutors for a reduced sentence. In essence, Paris helped to redirect taxpayer funds to state legislators in exchange for some of those funds being diverted to Ecclesia.

Last year, I wrote some posts about a bribery case in Arkansas involving a State Senator, a State Representative and the president of Ecclesia College, Oren Paris III. Despite being a small college, Ecclesia has some big names on one of their boards, including David Barton and Eric Metaxas.

Initially, Paris and his board proclaimed innocence. However, he eventually pleaded guilty and will be sentenced on September 12. This press release from the Department of Justice’s U.S. Attorney’s Office in the Western District of Arkansas announces a very strong sentence against the State Senator involved Johnathan Woods. Those involved concocted a scheme to secure taxpayer funds through kickbacks and bribes.

The press release below provides a good summary of the situation. To get more background see also these posts.

Fayetteville, Arkansas – Former Arkansas State Senator Johnathan Woods was sentenced today to 220 months in prison for organizing and leading a bribery scheme in which state funds were directed to non-profit entities in exchange for kickbacks, many of which were funneled through a consultant’s business, announced U.S. Attorney Duane “DAK” Kees for the Western District of Arkansas, Assistant Attorney General Brian A. Benczkowski of the Justice Department’s Criminal Division, FBI Special Agent in Charge Diane Upchurch and IRS Special Agent in Charge Tamera Cantu.

On May 3 2018, a jury found Jonathan E. Woods, 41, of Springdale, Arkansas, guilty of 15 counts, including conspiracy, honest services wire and mail fraud, and money laundering.  In addition to his prison sentence, U.S. District Judge Timothy L. Brooks of the Western District of Arkansas sentenced Woods to serve three years of supervised release and ordered Woods to pay $1,621,500.00 in restitution.

“Today’s sentence is the result of very hard work by the assigned Assistant United States Attorneys and the special agents from the IRS and the FBI”, said United States Attorney DAK Kees.  “We both respect and appreciate the judgment of the Court and the sentence that Judge Brooks ordered today.  This sentence should send a message to the people who would abuse the trust of Arkansas voters and citizens.  It should serve as a serious warning to those who would intentionally steal money from taxpayers and use their elected office to both commit and conceal their crimes.  As I stated after the jury trial concluded, my office, along with the Criminal Division from the Department of Justice, will continue to investigate, pursue and prosecute public corruption cases in Arkansas in order to ensure the fairness and justice that the people of Arkansas deserve.”

“Jonathan Woods abused his position as an Arkansas State Senator and betrayed the public trust by taking bribes and kickbacks,” said Assistant Attorney General Benczkowski.  “This conviction demonstrates the commitment of the Department of Justice and our federal partners to investigate and prosecute public officials who misuse their authority to benefit themselves at the expense of the citizens they pledged to serve.”

“Jonathan Woods violated the public’s trust and misused his authority for the purpose of lining his own pockets,” said Special Agent in Charge Diane Upchurch with the Little Rock FBI Field Office, “We are proud of the commitment of our partners at the United States Attorney’s Office of the Western Division, the IRS, and the Criminal Division’s Public Integrity Section.”

According to the evidence presented at trial, Woods served as an Arkansas State Senator from 2013 to 2017.  Between approximately 2013 and approximately 2015, Woods used his official position as a senator to appropriate and direct government money, known as General Improvement Funds (GIF), to two non-profit entities by, among other things, directly authorizing GIF disbursements and advising other Arkansas legislators – including former State Representative Micah Neal, 43, of Springdale, Arkansas – to contribute GIF to the non-profits.  Specifically, Woods and Neal authorized and directed the Northwest Arkansas Economic Development District, which was responsible for disbursing the GIF, to award a total of approximately $600,000 in GIF money to the two non-profit entities.  The evidence further showed that Woods and Neal received bribes from officials at both non-profits, including Oren Paris III, 50, of Springdale, Arkansas, who was the president of a college.  Woods initially facilitated $200,000 of GIF money to the college and later, together with Neal, directed another $200,000 to the college, all in exchange for kickbacks.  To pay and conceal the kickbacks to Woods and Neal, Paris paid a portion of the GIF to a consulting company controlled by Randell G. Shelton Jr., 39, of Alma, Arkansas.  Shelton then kept a portion of the money and paid the other portion to Woods and Neal.  Paris also bribed Woods by hiring Woods’s friend to an administrative position at the college.

Incidentally, Judge Brooks is also the presiding judge in the Gospel for Asia case.