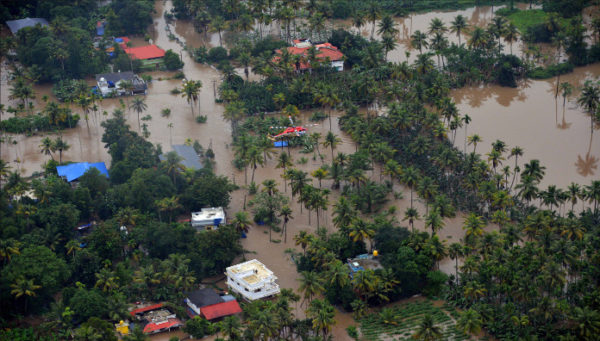 Over the past week, the news out of the state of Kerala in India has been devastating. Due to severe flooding, over 400 are dead and 800,000 have been displaced. Sadly, those numbers are expected to climb. Of course, the natural impulse is to help.

Kerala is the home of K.P. Yohannan, Gospel for Asia (now called Ayana Charitable Trust in India), and Believers’ Church. While it is understandable that K.P. has been informing his followers about what is happening there, he is also doing something that raises a question: K.P. is raising foreign donations to send to flood victims. The question is how will those funds get to flood victims?

In 2017, the government of India canceled the registration of Gospel for Asia (Ayana Charitable Trust), Believers’ Church India, and two other affiliated organizations to receive foreign donations. Yohannan is raising money but it isn’t clear how those funds will get to flood victims when the Indian organizations he fronts can’t receive them?

Yesterday via email in response to a GFA press release asking for donations for flood victims, I asked public relations contact Gregg Wooding of InChrist Communications if he could explain how donations will get to flood victims. He replied:

GFA has headquarters in Kerala, India. Volunteers are actively rescuing, feeding those affected by flooding and providing other supplies.

I wrote back to ask how GFA in Kerala could receive those funds since the Indian government had canceled the organization’s FCRA registration. He did not answer.

Earlier in the day a source called GFA in Wills Point, TX on behalf of my blog and asked how American donations could be accepted in India since the FCRA registrations had been canceled. The caller was told that GFA still is able to operate in India, but the license to receive money is with Believers Eastern Church. The GFA representative said that the funds given to GFA are sent to Believers Church. He added that GFA and Believers’ Church are technically and legally different entities. GFA cannot guarantee money given for India disaster relief will be used for that purpose through Believers’ Church because GFA has no legal or ultimate authority over Believers’ Church. Money given to GFA is preferenced by donors for a certain purpose and Believers’ Church in practice uses the money for what it is preferenced for.

Leaving aside the uncertainty that the Believers’ Church might not use the funds as intended, GFA’s answer doesn’t match what the Indian government says. As I will demonstrate below, the registrations for GFA (Ayana Charitable Trust), Believers’ Church, and two other GFA affiliated organizations were canceled in 2017.  The question remains – how will American funds get to flood victims since GFA and Believers’ Church are unable to receive foreign contributions? Maybe there is an answer to this question, but GFA hasn’t provided one that fits with information available to the public.

In India, a charity must be registered with the government to receive foreign donations. There are rigorous reporting requirements as specified by the Foreign Contribution Regulation Act (FCRA) and the records are available to the world via the Home Ministry’s website. In fact, those records prompted the early questions about Gospel for Asia’s finances that eventually led to GFA being removed from membership in the Evangelical Council for Financial Accountability.

The FCRA rules are clear that only registered organizations can receive foreign donations (click here for a larger image).

Among other conditions, the rules (Q.2b) state that an organization “must obtain the FCRA registration/prior permission from the Central Government.” In contrast, Q.3i specifies that “individuals or associations who have been prohibited from receiving foreign contributions” cannot receive them.

To determine organizations which have been canceled, one can go to the India’s Home Ministry website and scroll down to the FCRA link.  On that site, there is a link near the bottom left which reads: List of Associations whose registration has been cancelled. If you click through, you will need to select the state of Kerala. Once you do that, you will see Ayana Charitable Trust at the top of the list. Scrolling down you will soon encounter Believers’ Church India and Love India Ministries and Last Hour Ministries.  Here are screen caps of Ayana Charitable Trust (formerly GFA-India), Believers’ Church, Love India Ministries, and Last Hour Ministries on the canceled list).

Since the very organizations which GFA and GFA’s PR representative said will take the money can’t do so, it is a fair and significant question to ask how donations intended for flood victims will get to them.  So far, GFA has not provided a satisfactory answer or provided evidence that the Indian government is wrong. Donors should demand more.