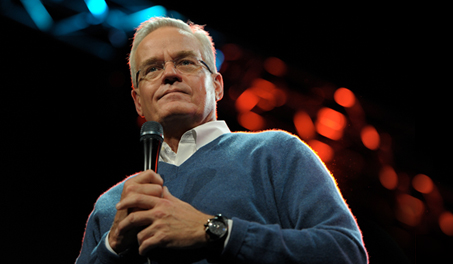 Eagle Brook Church in the Twin Cities area of MN is not going to host the Global Leadership Summit this year. Although this decision has been made for awhile, public disclosure of it has been limited.

Back in May, Benjamin Ady tweeted this letter which the church sent to those who attended the GLS in the past.

Because you’ve been involved with the Global Leadership Summit in the past, we wanted you to be among the first to know that we’ve decided not to host the GLS this year. In all of the years we’ve been connected with the GLS, we’ve so appreciated the wisdom it’s instilled in our leaders, our attenders, and so many others in our community.

However, this year we felt it would no longer uphold the standard of excellence and integrity it has previously been known for due to the recent accusations surrounding Bill Hybels and his subsequent resignation. Because of all this, we decided to step down as a host site.

If you’d like to know more about this decision, here’s a note from our senior pastor, Bob Merritt.

Merritt’s letter is below:

From the moment the accusations regarding Bill Hybels became known, the Eagle Brook Executive Team met every week—and ultimately, we decided we could no longer host the Global Leadership Summit. We have labored over our decision and understand the full ramifications of it.

We have decided not to host the Summit this year for two primary reasons. First, we believe the value of the Summit has been compromised. Bill was historically a big draw for us, and as we evaluate this year’s lineup, we don’t believe it will offer the same value for attenders.

We are not trying to make a point, and we are deeply saddened by all that’s happened. But we believe this decision is best for our church.

We are grateful for the positive impact the GLS has had on our church and churches all over the world. If the GLS can right the ship and find a new leader or a greatly restored leader, we would consider hosting again.

Currently, if you count Willow Creek Church as one location, 494 simulcast sites are listed on the conference website as participating venues. Willow Creek Association started the year with 700 sites.