See correction below – Ravi Zacharias’ Ligonier bio has been changed to make it accurate.
…………………………………………….
In a 2015 Church of England report evaluating ministry training at Wycliffe Hall, reviewers disclosed that the relationship between the Oxford University affiliate

and Ravi Zacharias International Ministries had become a “cause of concern.” In 2006, Wycliffe Hall, a theological training center for the Church of England established the Oxford Centre for Christian Apologetics in cooperation with RZIM. However, Oxford University became concerned that the admissions to the centre were being confused with admissions to Oxford.

WH began a relationship with Ravi Zacharias International Ministries in 2006, establishing OCCA, the Oxford Centre for Christian Apologetics. The relationship became a cause of concern to the university when admissions to the centre were not clearly differentiated from admissions to the university. Admissions procedures have now been clarified although some concerns remain for the university. For WH, the attraction of OCCA is important for recruitment to the Certificate in Theological Studies, particularly in relation to overseas students, whilst remaining clearly a separate entity. The independent students who had accessed the teaching of OCCA were very positive about it. A member of teaching staff is shared between WH and OCCA.

The concern disclosed in this report may be what led Wycliffe Hall to end Ravi Zacharias’ honorific position of Senior Research Lecturer in 2015 and suspended the use of such titles. According to an email from Michael Lloyd at Wycliffe Hall to Steve Baughman, Wycliffe Hall took several actions pertinent to the Church of England report near the end of 2015. 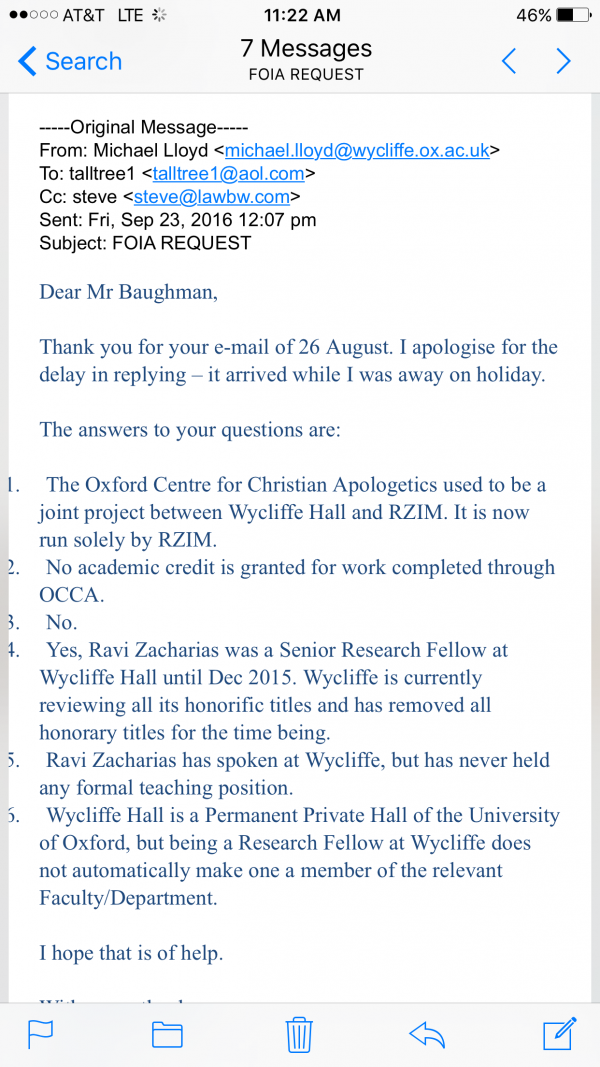 The organizations are separate. The current websites make this clear. According to this email from Wycliffe Hall, even at the time, it was deceptive to say that an honorific title at Wycliffe Hall meant one was a lecturer at Oxford University.

His current bios at Veritas Forum, BioLogos, The Stream, and elsewhere have this information.

Over the years, Zacharias has created the impression that his work was accredited by Oxford. In 2012, he told Ligonier Ministries:

Our Oxford Centre for Christian Apologetics (OCCA) is now accredited with degree programs at Oxford University.

He wrote in his autobiography that he is “an official lecturer at Oxford University,” “lecturing there once a year” and has said that in at least one media appearance.  It is no wonder that officials at Oxford and the Church of England expressed concern that there might be confusion about the relationship between OCCA and Oxford.

Ravi Zacharias Did Not Fully Addressed the Credentials Controversy

In RZIM’s December statement, there was no mention of the false claims about connections to Cambridge and Oxford. These were the most deceptive claims but these did not get any explanation. RZIM supporters share the burden of addressing these issues. Ravi Zacharias cannot claim to have addressed the controversy with integrity until he can address head on these issues and take steps to correct the numerous deceptive representations of his work for which his organization is responsible.