Monday, Glenn Beck devoted some time on his broadcast to graduates of Mercury One’s internship program. The program went from June 5-16 and featured history lessons taught by David Barton.  The segment of the broadcast gave time to the participants to debrief about what they learned. Watch (the embed feature no longer works so try this link):

The comments from students provide a window into the problems with the internship. It appears that these students have a lot to unlearn. Worse, they don’t seem to know it.
For instance at 1:24 into the segment, the second student who spoke, Sonja, said

Mr. Barton showed us the Quran that was actually printed in 1803, I believe, by Jefferson after the Barbary wars, and the thought, the idea that the leaders of the country would not only say, hey, this would be a good idea to learn but they encouraged promoted that to learn about people who were different, to learn, not that they were terrible people, not slandering them, but saying this is who they are, this is what they are about. That is a completely different approach to knowledge and truth than we have today. 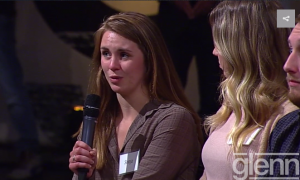 before). Sonja has been misled on two important points.

Jefferson did not print a Quran in 1803 or any other year.

The first version of the Quran printed in America was published in 1806. You can peruse a copy here; there is no mention of Jefferson or the government. The translation from a 1647 French version was originally conducted in 1649 and then reprinted by Henry Brewer for Springfield, MA publisher Isaiah Thomas in 1806 (source). Brewer and Thomas may have capitalized on the interest in Islam during Jefferson’s terms as president since we were at war with several Islamic nations. However, Jefferson had nothing to do with the printing. (Source, source)

The leaders of the U.S. didn’t print a Quran, so they couldn’t have encouraged the public in the manner described.

Beck Doubles Down on the False Narrative

After Sonja spoke, Glenn Beck compounded the error by suggesting Congress printed the Quran without comment for a purpose. Beck said:

There’s something specific about that struck me that was unusual. It wasn’t Congress or anybody around Jefferson that said, ‘hey, we are going to print these excerpts.’ They printed the entire thing, without comment in it. They just said, ‘you need to read this whole thing.’ That is not what we do now.

First, the government didn’t print the Quran. Second, the printers of the 1806 Quran did include comment which was quite judgmental of Islam, calling the contents of the book “absurdities.”
I challenge Barton or Beck to provide a primary source supporting the claim that Congress or Jefferson had anything to do with the 1806 edition of the Quran. I will apologize and remove this post if they can do that.
Beck titled his segment, Mercury One Arms New Generation of Leaders With Truth-Detecting Tools. Unfortunately, if today’s broadcast is any indication, these students have been disarmed. They won’t be able to be effective because they are now confidently misinformed. Because of the video, we know who is responsible.
I also invite any of the students to contact me about their experience.