At the end of 2014, Mars Hill Church closed down. Several ends were loose as MHC ceased to hold services. Mark Driscoll had left the church but there was much curiosity about the report prepared by his elders which called on him to step down and enter a plan of restoration. That report was never released.
The status of the assets of MHC was also of interest to many members and ex-members. The plan was to distribute the remaining funds and proceeds from sales to 11 MHC video locations that became free standing churches. Nothing was explained to the public by remaining administrators Kerry Dodds and Caleb Walters.
Recently, I have obtained the plans of dissolution for MHC and the MHC Foundation for Planting Churches as filed with the Attorney General’s office. The latter was a trust on behalf of MHC and had $154,732 remaining in an account. After expenses, the proceeds of those funds went to an Indian mission, Visions Nationals, and the mission to Ethiopia, New Covenant Foundation. After these groups had been used to solicit funds for Mars Hill Global, it is nice to see them benefit.
Read the Dissolution Plan for Mars Hill Church Foundation for Planting Churches
Although no figures are given, the distribution of remaining assets owned by Mars Hill Church were given to the 11 churches according to their attendance and offerings. See the distribution percentages below: 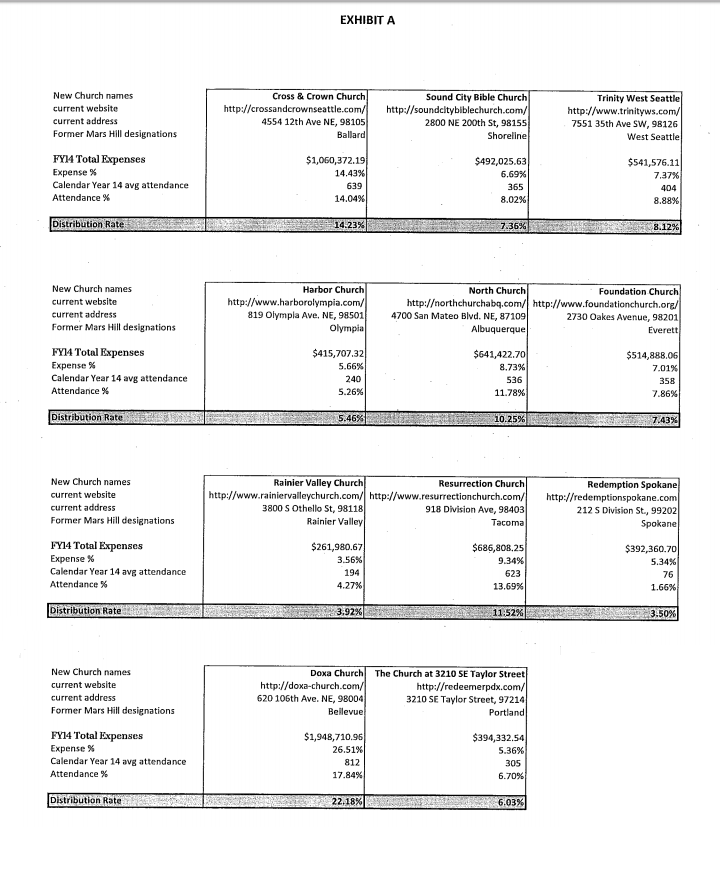 Although the plan doesn’t specify the amount of money involved, the assets were distributed according to financial and attendance numbers.
Read the Dissolution Plan for Mars Hill Church
The church’s official date of dissolution was June 30, 2016:

Plan of Distribution. The Board hereby approves, authorizes, and consents to the voluntary dissolution of the Corporation, such dissolution to be effected in a reasonably expeditious manner but in no event later than June 30, 2016, and in accordance with the Plan set forth in this Agreement.