Last year and then again recently, I pointed out that the charity founded by Glenn Beck, Mercury One, gave David Barton’s Wallbuilders $204,000 over a two year period from 2013-2014. The grants are complicated by the fact that David Barton is chair of the board at Mercury One. When I reported this, I neglected to point out that the recipient organization for one of those grants ($104,000 in 2014) was stripped of tax exempt status in 2011 by the IRS for failing to submit yearly forms. Look at Mercury One’s 990 report for 2014 on this grant to Wall Builders:

Notice the employer identification number: 22-3252844 (different than the number for Barton’s Wallbuilders Presentations). This is a federal identification number for a non-profit titled Wall Builders LLC. The address on the Mercury One’s website is the same as David Barton’s non-profit version of Wallbuilders Presentations. The first problem is that the gift is for “unforeseen disasters” which Wallbuilders has no obvious history of doing in a formal manner.
The second problem is that the grant was given to a Wallbuilders which was inactive.  However, tracking the EIN at the IRS, I learned that this organization had its tax exempt status revoked in 2011. 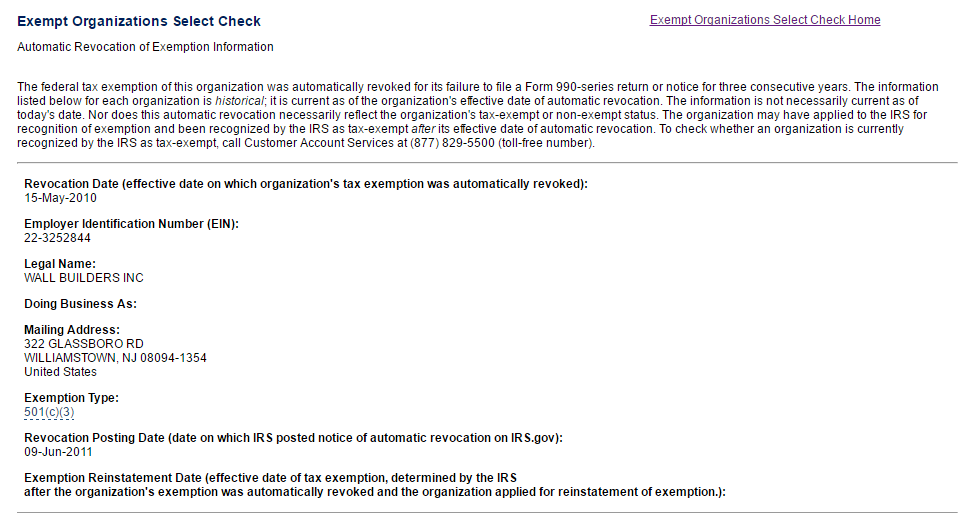 Oddly, the address is in NJ* and not Texas as it says on the 990. In any case, this organization appears to be inactive and is unable to accept donations on a tax exempt basis.
Natural questions are: Where did those funds go and how were they used?

*322 Glassboro Road in Williamstown, NJ doesn’t appear to be an actual address, but may reflect the fact that Glassboro Road is US Route 322. It isn’t clear why the addresses are different. I asked Mercury One for clarification on the grant to this Wall Builders but did not get a response.
UPDATE: It is possible that the EIN is a mistake. Or perhaps Mercury One gave money to a Wall Builders in NJ (even though no one at the church knew about it when I called, there is one listed at St Matthews Baptist Church on Glassboro Road in Williamstown, NJ) but the wrong address was listed in the 990 form.