For years, K-LOVE* has been telling people during the pledge drives that a qualifying pledge (this year $40/month via automatic bank withdrawal) will not only keep K-LOVE on the air but also provides a warm coat for a needy child.  The ad below gives the basic pitch: 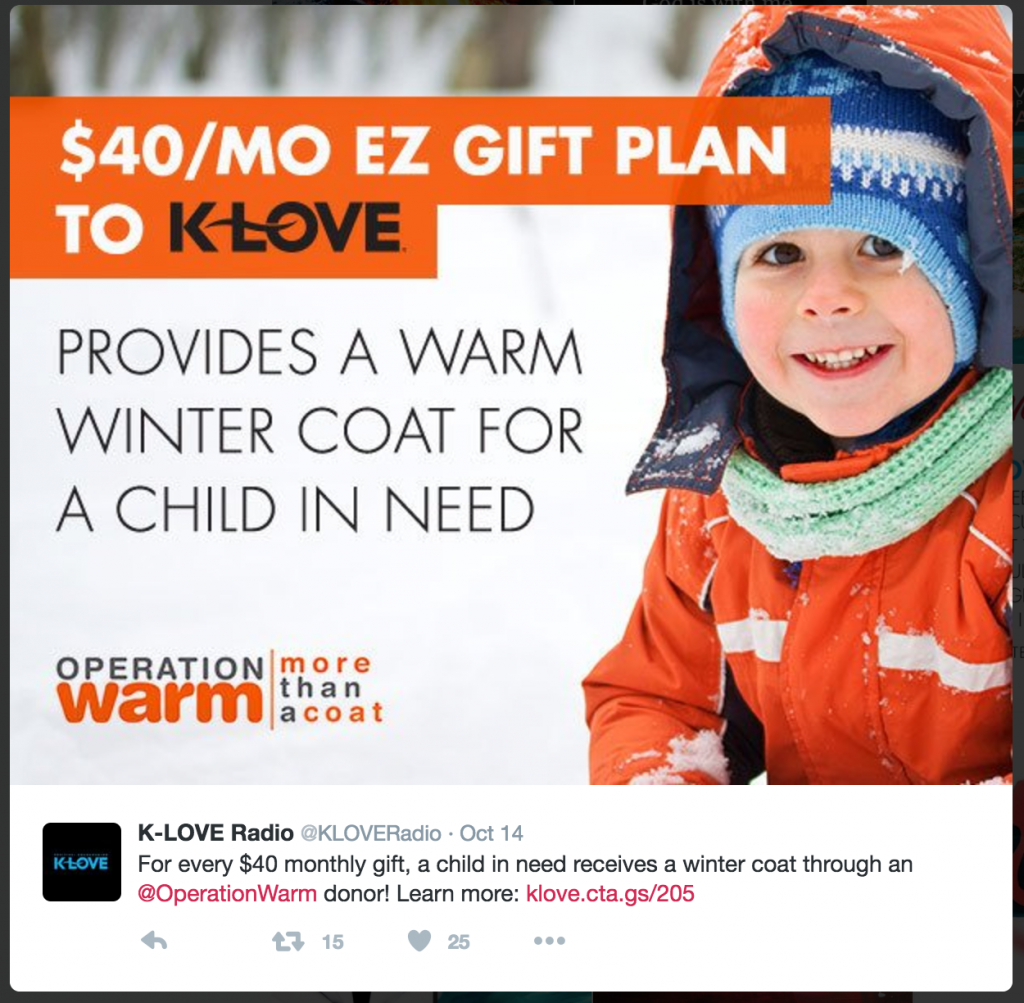 The video promotion below makes it clear that K-LOVE claims that a $40/month gift is the reason why a child gets a warm coat.
[youtube]https://www.youtube.com/watch?v=Mf7Ryp1OI4Q[/youtube]
In fact, there is reason to doubt the linkage promoted by K-LOVE. After looking into it, I think this promise is a kind of donor illusion.  For instance, buying a goat or other livestock for a family is mostly an illusion. Likewise, child sponsorships often do not benefit just one child. In this case, it doesn’t appear that there is a donor at Operation Warm waiting for K-LOVE donors to give $40/month. The pitch creates an illusion that a K-LOVE donation prompts a coat to be given that otherwise wouldn’t be. In fact, here’s what I think is happening:

1. K-LOVE listeners are told in many different ways that if they give $40 monthly to K-LOVE, a child will get a coat through an OW donor just because they called to give.
2. Although the information from K-LOVE and OW conflicts, I don’t believe that there are OW donors who base their gifts to OW on K-LOVE donors giving to K-LOVE. OW donors are asked to give to pay for coats that will be given away even if K-LOVE doesn’t promote OW.
3. In exchange for publicity during the pledge drives, OW allows K-LOVE to take credit for a coat giveaway. K-LOVE attends an OW coat giveaway event and credits K-LOVE and its listeners for providing the coats, even though the donations to OW were not made on the basis of K-LOVE pledges.
K-LOVE and OW set up a dramatic illusion. Even though the two organizations agree before the pledge drive even starts how many coats they will give away (in exchange for the advertising), the K-LOVE on-air personalities pretend that the pledges matter. The coat for a needy child is held over the heads of donors. Will a needy child get a new coat? It’s all up to you, K-LOVE donor.
Some Former Employees Were Alarmed about the Illusion
Former employees I contacted confirmed that listeners are definitely under the impression that a $40 monthly gift to KLOVE/Air1 will cause an ‘anonymous donor’ to buy a coat for a child through Operation Warm.
They say many K-LOVE employees believe every new, qualifying K-LOVE/Air1 listener causes this ‘anonymous donor’ to buy another new coat. “For those of us behind the scenes, it was alarming to find out it wasn’t true,” one told me.
Straight Answers Are Hard to Get
Before I explain more, I want to say that K-LOVE and OW were initially responsive to requests. However, as I pressed for more information, I stopped receiving replies from both K-LOVE and OW. Specifically, I asked directly if coats would go to needy children even if K-LOVE wasn’t involved. This question was never directly answered.
Initially I asked OW three questions:

Here is what Brock with OW told me in reply.

Please note the final sentence. The donations were not made because (“in honor of”) K-LOVE listener pledges. However, in exchange for lots of advertising during K-LOVE’s pledge drive, OW gives a coat to a child to commemorate the donation. Does this mean that OW is holding on to coats waiting on K-LOVE donors to pledge? I don’t believe so, but if it does then I think donors should rethink giving to OW.
I also wrote K-LOVE with similar questions and received a reply from attorney Stacie Ford, General Counsel at K-LOVE:

Addressing your questions, our partnership with Operation Warm provides significant value to them and to us.  Our contract with OW makes clear that OW is providing the coats, and the consideration is the value of the promotion they receive from K-LOVE and Air1.  We are unambiguous regarding this agreement, and repeatedly inform listeners on-air and on our website that “100% of your gift stays with K-LOVE/Air1.  When you give, a generous donor comes along side of your donation and supplies a winter coat to a child through Operation Warm.”
Specifically, OW secures donors with intention to allocate coats for the Pledge Drive.  Donors provide resources to OW based on the impact OW’s participation with K-LOVE and Air1 will have on OW’s mission.  In turn, K-LOVE and Air1’s inclusion of OW during the Pledge Drive increases the visibility and promotion of the non-profit.  Notwithstanding, if any of the coats allocated for K-LOVE and AIR1 would have been donated to those in need regardless of the Pledge Drive, the Pledge Drive provided huge promotional value to OW that arguably multiplied the number of donors and donations they otherwise would have received.

In a follow up email, I asked Ms. Ford about Brock’s statement that money wasn’t given to OW because of K-LOVE donors. However, she did not answer.
OW and K-LOVE appear to be at odds over OW’s donations. Ms. Ford told me “When you give, a generous donor comes along side of your donation and supplies a winter coat to a child through Operation Warm.” However, Brock at OW told me “The donations to Operation Warm were not made in honor of KLOVE listeners…” One explanation makes it seem that a donor at OW is waiting for a K-LOVE pledge to make the donation of a coat. The other implies that donors simply give to OW independent of the pledge drive. Based on OW’s input and that of former K-LOVE employees, I don’t think there is direct linkage between K-LOVE pledges and an OW donation.
I received one more response from OW. This response is enlightening because it shows that K-LOVE and OW agree before the pledge drive how many coats OW is willing to part with in exchange for the advertising given by K-LOVE. OW’s Brock wrote:

Throughout their promotions, KLOVE clearly states that the EZ Pledge donations stay with KLOVE. Also, Operation Warm pays no fee to KLOVE; rather, KLOVE provides Operation Warm with very valuable promotional support which results in more support for OW and therefore more children receiving new winter coats.
Prior to our campaign with KLOVE, we mutually agreed on the number of coats that would be provided in coordination with the pledge drive, up to a certain number of coats.  If KLOVE met that number, that same number of coats would be provided to children through Operation Warm this season. KLOVE’s promotional support has allowed us to spread our mission and receive support we would not have received without them. We’re happy to report that KLOVE met their pledge numbers and 27,000 children throughout the country will receive a new coat that did not have one before!

I asked both Stacie and Brock what happens to those coats if K-LOVE’s donors don’t come through with the amounts of pledges agreed to by the two organizations. Neither organization answered. I believe those coats would go to children in the name of some other media partner or no media partner at all (OW gave away over 300,000 coats last year). In other words, if OW donors give money for coats, a child will get a coat, pledge drive or not.
So What’s Happening?
Putting all of these statements together, it appears to me that OW gets donations from their donors to make coats. K-LOVE offers advertising to OW in exchange for the right to say that existing OW coats are being given in honor of K-LOVE donors. OW and K-LOVE agree in advance how many coats K-LOVE gets to leverage to listeners. At the end of the pledge drive, K-LOVE tells OW how many qualifying pledges were made and then OW allows K-LOVE to do a publicity giveaway event with coats which would have been given to children anyway.
I sent the paragraph above to K-LOVE and OW and asked them to correct any factual errors. I did not get a response from either organization.
If it is true that OW would withhold coats provided with OW donor dollars because K-LOVE donors didn’t make a qualifying pledge, then I think donors should question why OW would do that. According to Brock at OW, donors didn’t give money in honor of K-LOVE pledges and so the coats purchased/created with those donations should not be held back.
Does K-LOVE Need Your Money?
Remember, K-LOVE’s CEO made nearly $600,000/year in FY 2015, with eight executives earning over $200k.  Some of the on-air personalities make well over $100k.  In FY 2015, K-LOVE/Air1 took in over $150 million and had a surplus of $64 million. Think about that the next time a single mother working two jobs calls K-LOVE to offer her sacrificial donation.
Even if one rationalizes the pitch, please understand that a donation to OW instead of K-LOVE will actually provide coats to children that won’t happen otherwise. I am disappointed by this deception and call on donors to reconsider rewarding it with their funds. This Christmas there are real needs in our communities which can be directly met. Join me in giving to food pantries or some other local charity (or even Operation Warm which seems to be a pretty good group other than colluding with this donor illusion) which will get resources to needy children.

*Air 1 also uses the same promotion. Air 1 is a sister network also owned by Educational Media Foundation. Many of those stations play less praise and worship and more Christian rock than K-LOVE. When I say K-LOVE, I mean both networks.