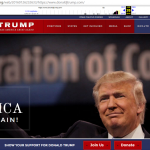 CBN’s The Brody File reported yesterday that Donald Trump will speak to a group of pastors in Florida about repealing the Johnson Amendment.

GOP presidential nominee Donald Trump will be speaking to hundreds of pastors this Thursday in Orlando, Florida. This is a private event sponsored by the American Renewal Project. Trump will speak to them about his push to repeal the Johnson Amendment. The law, which has been in place for decades, is perceived by some Christians as making it more difficult for pastors to speak out on political issues and candidates from the pulpit.

Correction: the amendment doesn’t prevent speaking on “political issues.” It does prohibit all tax-exempt organizations from campaigning or advocating for specific candidates.  Here is the IRS guidance on the matter:

Under the Internal Revenue Code, all section 501(c)(3) organizations are absolutely prohibited from directly or indirectly participating in, or intervening in, any political campaign on behalf of (or in opposition to) any candidate for elective public office. Contributions to political campaign funds or public statements of position (verbal or written) made on behalf of the organization in favor of or in opposition to any candidate for public office clearly violate the prohibition against political campaign activity.  Violating this prohibition may result in denial or revocation of tax-exempt status and the imposition of certain excise taxes.
Certain activities or expenditures may not be prohibited depending on the facts and circumstances.  For example, certain voter education activities (including presenting public forums and publishing voter education guides) conducted in a non-partisan manner do not constitute prohibited political campaign activity. In addition, other activities intended to encourage people to participate in the electoral process, such as voter registration and get-out-the-vote drives, would not be prohibited political campaign activity if conducted in a non-partisan manner.
On the other hand, voter education or registration activities with evidence of bias that (a) would favor one candidate over another; (b) oppose a candidate in some manner; or (c) have the effect of favoring a candidate or group of candidates, will constitute prohibited participation or intervention.

The prohibition is about campaigning for a person, not speaking out on issues. Ministers may speak about any issue and even speak in favor of a candidate, but they may not involve their churches in partisan campaign activities. It is very sad to me that any minister would want to use the church of Christ to promote a candidate but since some would, I am actually glad that the Johnson Amendment exists.
Many Christian supporters of Trump (e.g., Eric Metaxas today) think it is a big deal that Trump wants to pursue a repeal of the Johnson Amendment. If one can rely on surveys, many pastors don’t agree. According to a Christianity Today analysis, most pastors don’t want to endorse specific candidates from the pulpit or on behalf of the church. For instance, CT cited a Lifeway Research survey which found that a whopping 87% of pastors disagreed with the statement: “Pastors should endorse candidates for public office from the pulpit.” Only 29% of a Pew Research sample of Protestants and Catholics felt that churches should endorse candidates during elections.
I am glad a majority of ministers don’t want to use the church as a political tool. Doing so subordinates the mission of the church to political aims. Taking sides also risks alienating church members who disagree. Those members can feel coerced to vote consistently with the church endorsement.
Furthermore, the IRS isn’t enforcing the law. According to CT, thousands of pastors have violated the law (just think of that when you hear Trump say he’s the law and order candidate), but the IRS hasn’t done much about it.  Trump’s Johnson Amendment promise is just another substance-free hook to hoodwink evangelical voters and soothe the doubts of evangelical endorsers.
Brody’s analysis of the Florida event is a pretty good argument why the Johnson Amendment isn’t currently relevant to what churches actually do. Brody said:

Events like this one will be crucial to Trump if he wants to beat Hillary Clinton. The reality is that evangelical pastors are a major key ingredient to mobilizing the masses. They hold great power over a captive audience every week in the pews. Trump needs them engaged. If they are, the flocks will typically follow. The result? A bottom up approach that will affect turnout exponentially. The top down approach of receiving key endorsements won’t do squat unless the evangelicals sitting in the pews are motivated. Trump shouldn’t assume that the anti-Hillary sentiment will be all he needs. No. He needs to do some work and by showing up in Orlando he’s well on his way to striking evangelical gold.

If Brody is right, then why does the Johnson Amendment matter? If Trump can get those pastors on his side, they will go pull spiritual rank on the captive sheep and the flock will get in line. There’s evangelical gold in them there churches and Trump needs to mine it like a boss.
I hope Brody is wrong. First, I hope most pastors will continue to resist a church endorsement of a candidate, and second, I hope the sheep break free from their captivity and become independent in their thinking and voting.