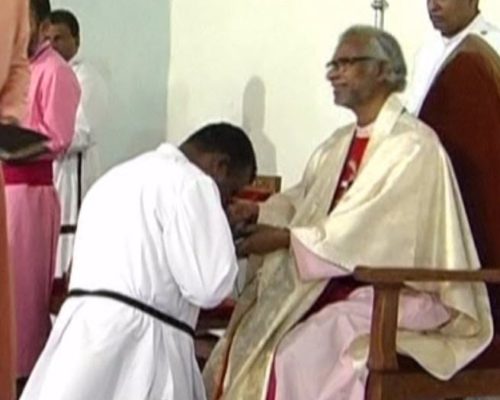 In May of this year, I posted a video of a Believers’ Church ordination service which appeared to show ministers kissing the ring of Gospel for Asia Founder and CEO K.P. Yohannan. Yohannan has denied allowing anyone to kiss his ring during rituals of the Believers’ Church. The following video makes it clear that those being ordained are doing something in the vicinity of Yohannan’s hand. If they aren’t kissing his ring, I think any observer could be excused for believing they are.

In an over two hour staff mega-meeting held on May 14, 2015, Yohannan again denied that ring kissing has any place in the church. This meeting took place before the video became available but the audio where K.P. offers a full-throated denial of the practice has not been made available before.
Here is the audio followed by the transcript.

(Listen on the website hosted by former staff of GFA)

David Carroll: There is one question that I think is on many of your minds and has been I think batted around a bit among us and that is, it’s asked a lot of ways but I’ll just ask it from this question plainly: Has ring kissing ever been a part of the Believers’ Church clergy ordination ceremony? Or I’ll just add: or any, is ring kissing is it required anywhere or is it still part of any of those things? Has it ever happened and if it has, if it used to be something that we did in some ceremony, are we still doing that? Kissing the ring?

K.P. Yohannan: What’s wrong with you? (Laughter) I kill you! (more laughter) Danny, I asked you, what is the meaning of kissing the ring? I thought about finding out what it actually means and obviously there’s submission to you or whatever. Now, if somebody said, ‘I saw somebody kissing the ring of our bishop or my ring, I would not tell that person, you are a liar. But if somebody asks me in your conscience and knowledge, you had taught or asked or has anybody kissed your ring, I would say as God almighty is my witness, it never happened, I never allowed it.

As a matter of fact, the most common, when this rumor started spreading, some Calvary Chapel pastors supposed to go to India and met some disgruntled person who left our ministry and started telling, you know, they’re teaching about kissing the ring. I remember that story came to me and immediately I contacted the field and said, ‘please, you know, we don’t want to be seen as belonging to some other church teaching, please don’t do it, if there is any like that.’ They said, ‘no, we never teach or practice that.’ But then I started wondering why somebody think this. So my thinking is you know the most common thing in China, India, all these countries when you see elders, especially spiritual leaders, what they do basically is they touch the feet, you can see that. And then I basically walk away from that. It has nothing to do with Christianity. It’s just culture. But then what the answer is, no, we don’t practice that, we don’t teach that, we teach against it so that we don’t get labeled by some other denomination but even today when you go to the mission field (unclear), what happens is when you meet the Metropolitan or the bishops and what they do is basically and they start doing this, they take the hand and do like that, and it’s not typically everywhere be like that, in most places, the actually touch the feet and express their honor, their respect.

When people are ordained, this the standard thing and by the way, let me say this to you. I fortunately, unfortunately, I like or not, I’m two human beings. I’m brother K.P., hi, K.P., yo, dude, all that here, people call me by all kinds of strange names. But you know when I bought the flight and land overseas, many have seen me a million times, I don’t look like this, I have a cassock, and I’m the Metropolitan of the church and the spiritual father of 2.7 million baptized believers right now. And when you ordain people you whether I like it or not I just submit to the church; that is, there’s a chair, the Bishop’s Chair, that I sit on. If it’s not me then it’s Bishop  _______ or Bishop ____________ and then people are ordained they come and they kneel to get the blessing, and they’re anointed by oil and make the sign of the Cross, and I tell them in the name of the Father, Son, and Holy Spirit now you are ordained minister of the church and that is done, that always be done. There’s not going to be any change in that; all cultures do that, I don’t know how it is done here, but they don’t fall prostrate before anyone or anything like that.

There is an odd near admission at the beginning (“I wouldn’t tell that person, you are a liar”), but then he clearly denies it and provides a narrative that makes the idea seem very far from the church. Given his description of the ordination at the end, I wonder why he didn’t explain what the newly minted minister was doing with Yohannan’s hand. In any case, no explanation has been given for the video.

It is hard for me to imagine how staff at GFA can watch the video in light of this denial. Clearly, some explanation is needed for this.