I have been raising concerns for weeks about Gospel for Asia’s use of students to carry undeclared cash to India and unreported donations in India.  GFA remains silent and the Evangelical Council for Financial Accountability appears to be disinterested in the evidence submitted. Neither organization responded to my request for comment and information about this post.
On the other hand, I regularly receive emails from former GFA donors and supporters who have taken the information very seriously and have contacted GFA. Thus far, no donor who has contacted me has expressed satisfaction with GFA’s answers. Also, I was recently contacted by Jason Watkins, a former auditor with a Big 4 accounting firm who did a detailed analysis of GFA’s finances using information publicly available from around the world. I will post more of his material in coming days, but for today, I want to post an image depicting Watkins’ analysis of where GFA funds were spent in 2012. See below: 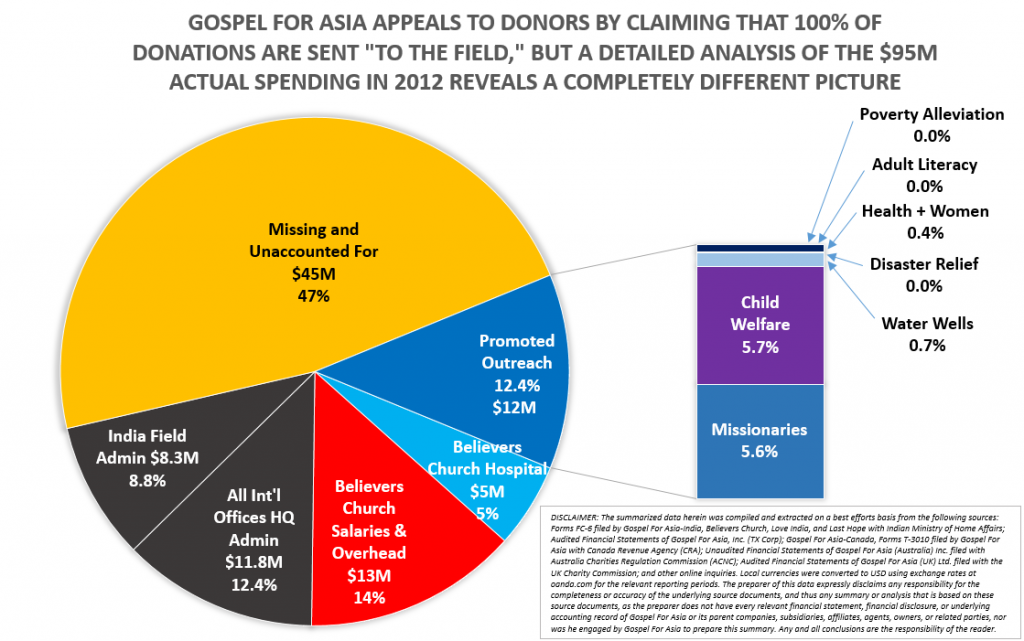 I have posted information which addresses some of these issues, but this image brings 2012 together in one place.*
Jason had this to say about the chart:

The data from the FC-6 Forms for the 4 GFA NGO’s (Gospel For Asia-India, Believers Church, Love India, and Last Hope) were obtained and converted to US dollars. The amounts reported as received from foreign (non-Indian) countries were reconciled to the amounts reported as sent by Gospel For Asia, Inc. (US), Gospel For Asia-Canada, Gospel For Asia-UK, et al. This reconciliation shows that nearly half of the money sent from the west was not reported as received by GFA in India. That money is not accounted for. That is, of the $95 million that was spent by all entities, $45 million was not reported and $50 million was reported in India.
Further, of the foreign $50 million that was reported as received in India, an analysis of the ways that money was spent was performed. This analysis segregated and identified the specific expense categories (water wells, children, women, disaster relief, missionaries, administrative expenses, et al) to show how much was actually spent for the purposes indicated.
The amounts on the pie chart are a sum of the spending categories [called ‘utilised’ on the FC-6] reported in India on the 4 GFA NGO’s FC-6 forms, and then dividing each spending category by the sum of the spending of all GFA entities ($95 million).

The Indian government requires completion of the FC-6 form by registered charities. GFA has completed those forms but, as Watkins points out, the GFA affiliates around the world report sending more funds than the FC-6 forms show as received.
Watkins found reason to question several of GFA’s signature claims:

Gospel For Asia (GFA) solicits and collects over $90 million per year from trusting donors by using the following claims:

I have asked GFA several times for information regarding these matters. However, GFA told me that the organization would answer no more questions. Regarding the claims of 100% going to the field, I have indicated before that much of the money is on the field, but it is sitting in banks.
Perhaps this is case of bad reporting on the part of GFA. Maybe there is some other explanation. I have acknowledged in the past that I am not an auditor and have been open from the beginning of my research to any information provided by GFA. However, when an experienced auditor examines the publicly available documents and comes away with these findings, I think it is past time for GFA to address these matters.
I have additional analyses to report and plan to do so in the coming days.